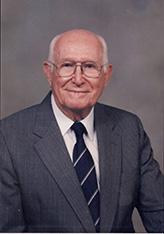 Howard William Collins, 101, of Port Arthur, died Saturday, January 28, 2017, in Houston, TX. He was born in Somerset County, Pennsylvania, September 9, 1915, the only child of the late O.W. Collins and Josephine Collins. The family moved to Texas in 1919, where his father was employed in building construction, living in Dallas, Port Arthur, Beaumont, and Houston before Port Arthur became their home location in 1929.

He attended schools in all of those cities, graduating from Port Arthur High School in January of 1933, with scholastic honors. He went to Port Arthur Business College and Rice Institute in Houston, graduating from Rice in 1937 with a Bachelor of Science in Civil Engineering. While at Rice he was involved in campus engineering activities, and played on the Rice Golf Team two years, lettering in 1936. A year after graduation, Rice awarded him with membership in Tau Beta Pi, an honorary engineering fraternity.

He was employed by the Texas Company Refinery in June of 1937, and worked for Texaco until retirement in 1980, with assignments in Engineering, Maintenance and Construction, and Plant Management. During this time he became a Registered Professional Engineer in the State of Texas, and on retirement a Life Member of the American Society of Civil Engineers.

During the early part of World War II, he was a member and officer in the Texas Air Defense Guard Unit flying out of Parker’s Port Arthur Air Field. He was also an officer in the U.S. Naval Reserve from 1943 to 1957, with several years active duty during WW II in the American and Pacific Theaters of war. After the war he joined the American Legion and remained a member until his death.

On November 13, 1944, Collins married Elizabeth Corinne Thorne of Port Arthur at the U.S. Naval Air Station in Jacksonville, Florida. He returned to work at Texaco from military leave in 1950. Their four sons, Bill, George, Eddie, and John, all grew up in Port Arthur and were Thomas Jefferson High School graduates before going to college.

As a child, his mother took him to Methodist Church Sunday Schools wherever they lived, and he became a member of Bering Memorial Methodist in Houston in 1927. In Port Arthur he attended First Methodist Church South, and as an adult became a charter member of St. Mark’s Methodist, serving on the original building committee and other committees through the years. He remained a member of that church through several mergers; the last was the United Methodist Temple of Port Arthur.

Howard joined the Boy Scouts of America when 12 years old and attained the rank of Eagle Scout; and as an adult became a volunteer leader at the troop and district level, receiving The Silver Beaver service award from the Three River Council in 1972. His four sons and four of his grandsons also attained the Eagle Scout rank.

He was a long time member and past president of the Port Arthur Founders Lions Club, joining the club in 1964; also, a Texas Lions Camp Century Club member and recipient of the Jack Wiech Fellow service award. His other service and civic activities included: Texaco member of the Port Arthur Chamber of Commerce for a few years, serving on the Highway and Sea Wall committees; the Texaco representative on the Gates Memorial Library Board at the time the new Port Arthur Public Library was being built; director on the O.W. Collins Apartments Public Housing Board for five years; and a member of the local Salvation Army Advisory Board for several years.

Collins enjoyed playing golf throughout most of his life, starting at the Stevens Park Public Course in Dallas at age 10, as a caddy. He continued in Port Arthur at Port Groves and the Country Club, also in college as mentioned previously. He was a low handicap golfer for many years, winning the Port Arthur Country Club championship in 1942. In retirement he has enjoyed playing regularly with friends and fellow retirees. Also in retirement he enjoyed many weekends and holidays of family fun at their camp cottage on Lake Amanda, near Colmesneil, Texas.