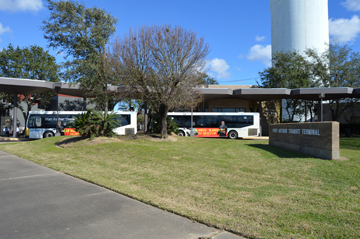 The Port Arthur City Council approved using the Port Arthur Transit Bus Terminal to serve as a bus station and ticket agent for Greyhound Bus Lines at their regular meeting on Tuesday night. It's been years since there was a Greyhound terminal downtown.

Greyhound Bus Lines will be making a return to downtown Port Arthur.

The Port Arthur City Council approved using the Port Arthur Transit Bus Terminal to serve as a bus station and ticket agent for Greyhound Bus Lines at their regular meeting on Tuesday night.

The resolution states the city council desires to attract new business downtown. Likewise, on Jan. 5, the Federal Transit Administration authorized the use of the Port Arthur Transit Bus Terminal by Greyhound Bus Lines due to the closure of their previous operating facility in Port Arthur.

This modification is in compliance with all Federal Transit Administration’s guidelines and regulations.

City Manager Brian McDougal said negotiations with the company started nearly a year ago. It is estimated Greyhound will raise $100,000 in revenues for the transit department.

Keith Richard, District 4 councilman, said he hopes this will drive entrepreneurs to start restaurants downtown so travelers will have a place to eat. McDougal said in the meantime the city will install some vending machines at the terminal.

Travelers will have to sit outside but McDougal said the wait for the Greyhound bus is usually no longer than 10 minutes.

Tiffany Hamilton, District 2 councilwoman, said she would like to see weekend bus routes for residents if and when Greyhound adds weekend routes.

Also transportation related, the council will consider approving a pre-employment workforce training agreement between the Port Arthur Economic Development Corporation and Lamar State College – Port Arthur for the training of Port Arthur residents as Class A Commercial Drivers. The training costs are not to exceed $40,000.

The remaining 50 percent of tuition will be paid once PAEDC receives confirmation the student obtains his/her CDL certification.

Richard said he would like to see the program expanded since there is a need for mechanics in the industry.

He then asked if LSCPA would be the driving force in choosing the residents who will attend.

Floyd Batiste, executive director of the PAEDC, said students are chosen based on if they are eligible to receive a Pell Grant.

“It’s based on income,” Batiste said. “We don’t’ want to pay for someone who can pay for themselves.”

Mayor Derrick Freeman encouraged those getting a CDL to consider driving a school bus since there’s a shortage of drivers.