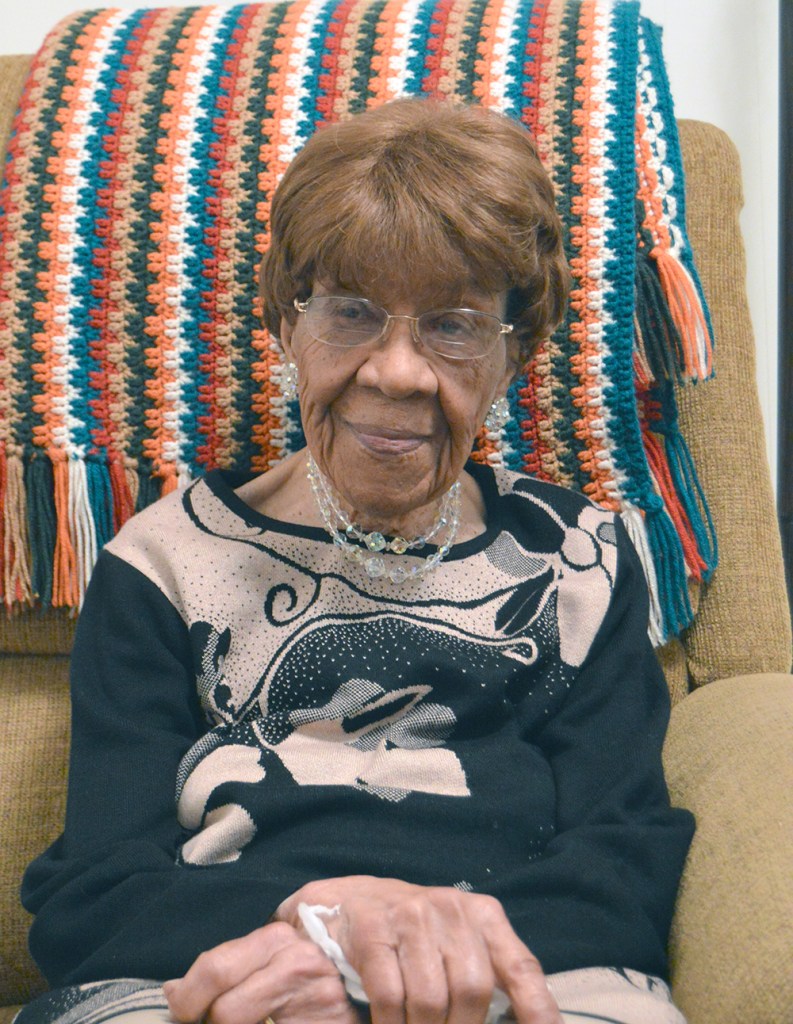 On Monday, Della Freeman had a birthday.

Freeman doesn’t drive anymore—she gave it up when she turned 96—but she lives alone and she still gets out. On Sunday, Freeman and a group of friends from Harvest Time Bible Church when to the Wheelhouse to celebrate her birthday.

“It was wonderful, it was so well attended,” she said.

It’s a big number, 103, and Freeman said she knows exactly where the credit goes.

Though she also said a healthy diet and activity has kept her alert and healthy, too.

“I was careful,” she said. “I got off of salt mostly and I ate healthy. I didn’t eat a lot of fried foods.”

Freeman was born during a time before chain restaurants and processed foods. On the day she was born, on Jan. 30, 1914, World War I was still months away in Europe and Pancho Villa was still leading his revolution in Mexico.

Freeman said she can still remember, back when she was small girl in Lake Charles, her father, a dock worker.

“My father died when I was 7 years old, he was only 39,” she said. “We didn’t have pictures of my father, but I remember my father. My father worked on the docks of Lake Charles and one thing I remember is my father got paid in silver dollars and my father sang in the choir at church.”

“I grew up in Dayton, Texas, until I was a teenager and then I came to Port Arthur,” she said. “I finished high school in Lincoln in1934.”

Freeman said she is the last person remaining from her graduating class. However, she said she does have a younger friend from high school who is still alive, though in a nursing home in New York.

Freeman said in those days, high school ended at the 11th grade. After she graduated, she said she wanted to see something new and she ended up moving to Los Angeles.

“I just wanted to,” she said. “I had visited there and I liked it, so I decided to move.”

She said she didn’t find the transition from Port Arthur to Los Angeles especially difficult.

“Well, I was young then, and I adapted real easily. It wasn’t difficult at all,” she said.

In Los Angeles she found work at the Los Angeles Probation Department and she met her husband. The remained married for 42 years, until his death in 1999.

She also lived through some of the most violent periods in the civil rights era—including the Watts riots, which brought the National Guard into Los Angeles and left 34 dead.

“I was there where the Watts Riots were,” she said. “Yes, it was very serious.”

However, for the most part Freeman said she stayed away from politics.

“I never engaged in politics too much,” she said. “Most of the things I did were mostly volunteering in hospitals and for people who needed it.”

Freeman returned to Port Arthur after Rita. She said at that point, she had no living relatives in Los Angeles and she wanted to be nearer to her family in Texas.

These days, she said she doesn’t have any family left in Port Arthur, either. However, Freeman still tries to be as active as possible.

“I had an opportunity to be interviewed by some of the kids from Tekoa Charter School,” she said. “They wanted to know my experiences. Of course they were amazed at my age. … I had so much information that they wanted to know about and I was able to tell them some things.”

The schoolchildren were not the only ones who were eager to hear about Freeman’s life. Darlene Williams, a friend from Los Angeles, came out to Port Arthur for Freeman’s birthday and she said something similar.

“It’s amazing to be around her and glean her wisdom,” Williams said.