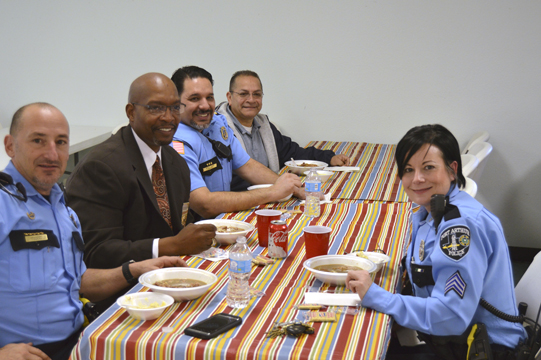 Police officials sit at one of the Parish Hall tables for their lunch from the Church's Senior Club. (Lorenzo Salinas/The News)

The short, clear reading of bingo numbers mixed with friendly chatter and polite questions about how much rice one would like Monday filled the Parish Hall of Our Lady of Guadalupe Church in Port Arthur.

The Church’s Senior Club hosted their first luncheon for first responders as uniformed firefighters and policemen filled the tables of the hall alongside church and club regulars.

The event started through something as simple as seeing someone else do it, according to club President Maria Saldana.

“One day I was sitting at home and saw someone host a luncheon for first responders on the news,” Saldana said, before remarking they wanted to do something to show their appreciation, as well.

The whole thing took about two months to organize, or at least since last Thanksgiving, according to Saldana.

“The club was very responsive to it,” she said. Saldana expressed hope that it would be the first in a series of regular luncheons intended to honor first responders. 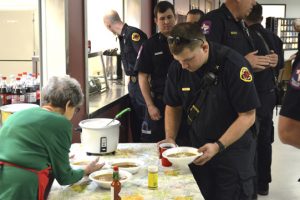 Seniors served hearty helpings of chicken and sausage gumbo and potato salad to police and fire personnel as they lined up at the table. Another club member handed out slices of pecan pie for those officers interested in dessert.

“It’s just a way of recognizing them and showing our appreciation for those assigned to protect us,” Vice President Hermando Gaytan said. “It’s the right thing to do.”

According to Gaytan, many people might take their policemen and firefighters for granted on a daily basis; so, this was a small gesture to show them they are not forgotten.

“It’s for everyone on the front line making sure we’re safe,” he said.

Among the local police seated at the table, Chief of the Port Arthur Police Department Patrick Melvin could be found mingling with his associates.

“We’re thankful to the people for reaching out to us,” Melvin said of the Senior Club. “It’s always a blessing when our seniors and elders break bread with us and give us the opportunity to accept meals from the community.” 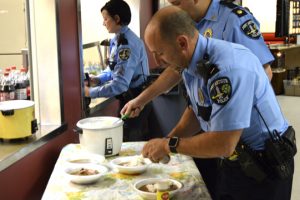 “It means a whole lot to us,” Free said. “It tells us that they support us and that they really appreciate what we’re doing.”

Free said it meant something special when people take the time out of their day to cook for them and offer them a meal.