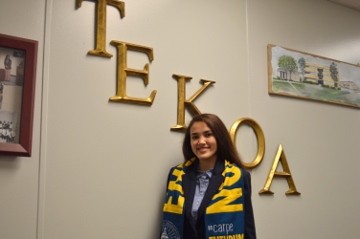 Tiana Burrell, a junior at Tekoa High School T-STEM Academy, was among a group of students who traveled to witness the inauguration of President Donald Trump. Mary Meaux/The News

Most recently Burrell had a chance to travel with fellow students as part of the school’s Envision Leadership group to witness the inauguration of the 45th president, Donald Trump.

She remembers how cold the weather was and of being in the second or third section away from the capitol building — and more.

“I really enjoyed being part of history,” Burrell said.

Seeing the inauguration was only part of her educational journey there. She was also part of a delegation on education where her group’s proposal, which was part of a competition, made it to the semi-finals where 1,200 high school students participated.

“What we learned from the experience was there were a lot of people for and against the president and of working past the differences and understanding both sides,” she said. “To be open and understand and even then not let that stop you from being noble to other people.”

The 5-day trip also included a chance to see groups of speakers take part in debates such as Tucker Carlson of Fox News and Paul Begala of CNN as well as Carly Fiorena and Martin O’Malley. In addition, the students heard from Malala Yousfazi, the youngest ever Nobel Prize laureate, she said.

Jeffery Lewis, special assistant to the CEO of Tekoa, speaks highly of her.

“Tiana has been an outstanding ambassador for Tekoa Academy,” Lewis said. “She represents the schools excellent academic, community and national partnerships. She is dedicated to her education by studying both on campus and in the dual credit program with Lamar State College Port Arthur.”

Burrell, who is Alutiiq-African American, is a native of Kodiak, Alaska. She has lived in several different states and at each one achieved academic success.

Burrell became part of the Duke University-Talent Identification Program in middle school after scoring in the 99th percentile on the Duke test. The program has allowed her the chance to take part in summits where she focused on psychology, which has become her chosen career field of the future.

“Right now I’m considering Cornell University, Rice University or Brown University,” she said. “Psychology is pretty interesting and such a broad field. I want to see where the career takes me.”

Her goals, she said were instilled in her.

“My parents have always told me I can do great things,” she said. “I want to go to college one day and be the first in my family and to set an example for my younger siblings.”

Burrell is a member of the National Society of High School Scholars of America and is an honor roll student at Tekoa.

Lewis explained that Burrell has represented Tekoa at an International Leadership conference in New York where her group won first place in presentations. She has also attended the At The Well Conference at Swarthmore University.