From the Triangle to the Super Bowl: Local ‘alumni’ talk about road 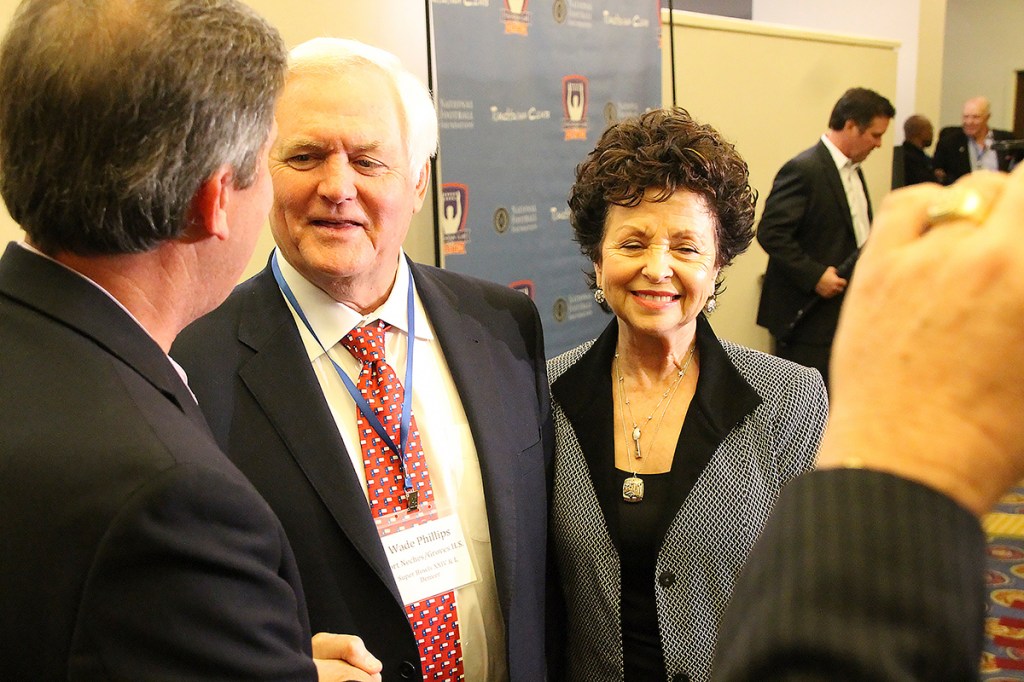 Los Angeles Rams defensive coordinator Wade Phillips and his wife Laurie meet and greet guets at the Touchdown Club of Houston’s “Super” Alumni Luncheon on Monday in Houston. Phillips was a defensive coordinator on two of the Denver Broncos’ Super Bowl teams (1989 and 2015 seasons), winning the latter. (I.C. Murrell/The News)

All three won a Super Bowl, and all three know how tough it is to make it there, let alone win it.

“You just try to do the best you can every year,” said Phillips, who won his first championship this time last year as the Denver Broncos’ defensive coordinator.

But for much of his 39 years coaching in the NFL, the 1965 Port Neches-Groves graduate coached on some standout teams that came up just a little short.

“We had some opportunities, even way back with the Oilers,” he said.

His father Bum led the great Houston teams of the late 1970s, but he and Wade found some of their teams bowing out to eventual Super Bowl champions over the years.

“Pittsburgh beat us twice [in the 1978 and 1979 AFC championships] and they won it, Oakland beat us once [in a 1980 wild-card game] and they won it,” Wade Phillips said. “When I was with the Cowboys, we went 13-3 and the Giants beat us [in an NFC divisional] and they won it. Then I lost to one of the 49ers teams in the Super Bowl [as a Denver defensive coordinator in the 1989 season].

“It’s a hard thing to do. It’s a difficult thing in a tough league, but [New England Patriots quarterback] Tom Brady seems to be there every year.”

Phillips spoke to the media and hobnobbed with other Super Bowl participants who graduated from Houston-area and South Texas high schools during the Touchdown Club of Houston’s “Super” Alumni Luncheon at the Marriott South Hotel on Monday. The luncheon helped kick off only the third Super Bowl week in Houston history.

One of the main topics was Golden Triangle’s footprint in Super Bowl lore. At least 20 from the area have played in the Super Bowl, including nine from the Port Arthur ISD, two from West Orange-Stark High and three from Bridge City. Thomas Jefferson grad Jimmy Johnson won two titles with the Dallas Cowboys.

“The fact of the matter is that we’ve had more NFL players than any other area in the country,” Lincoln product Joe Washington said. “We’ve got good water down there.”

Washington played in Super Bowls 17 and 18 (1982 and 1983 seasons) with the Washington Redskins, winning on his first try. He couldn’t single just one favorite memory from his victory over the Miami Dolphins.

“All of them” are his favorites, the former running back said. “Seeing all the excitement from seeing each and every one of the fans there to watching John Riggins on fourth-and-1 and he ended up scoring, that’s exciting. Because, for one thing, it’s tough to get there, and you don’t know if you’re going to get there.”

Bobby Leopold graduated from Lincoln in 1976, four years after Washington, and was a linebacker on the 1981 champion San Francisco 49ers.

“We were so prepared for that game,” he said. “We ended up winning it, and we didn’t realize that the season was over until we got back to San Francisco.”

Phillips and the Broncos failed to make the playoffs this season, and the Los Angeles Rams hired him as their defensive coordinator on Jan. 19. The Rams are the 10th franchise to employ the 69-year-old, who was a quarterback at PNG for his father.

“The Golden Triangle has had great athletes except for me, but hopefully I did a good job coaching from that area,” he said. “It’s always been a lot of players come from that area, and that seems to continue.”

Phillips completed a book titled “Son of Bum” that will be released Father’s Day. It’s about his career and the lessons he learned from his father.

One thing he’s learned is that every season is a different challenge. “Just starting anew,” he said, is his challenge with the Rams.

“I think the six or seven times I’ve gone in as a new coordinator, you have to get things going quickly,” he said. “It’s a win-now league, and we’ve been able to do that.”