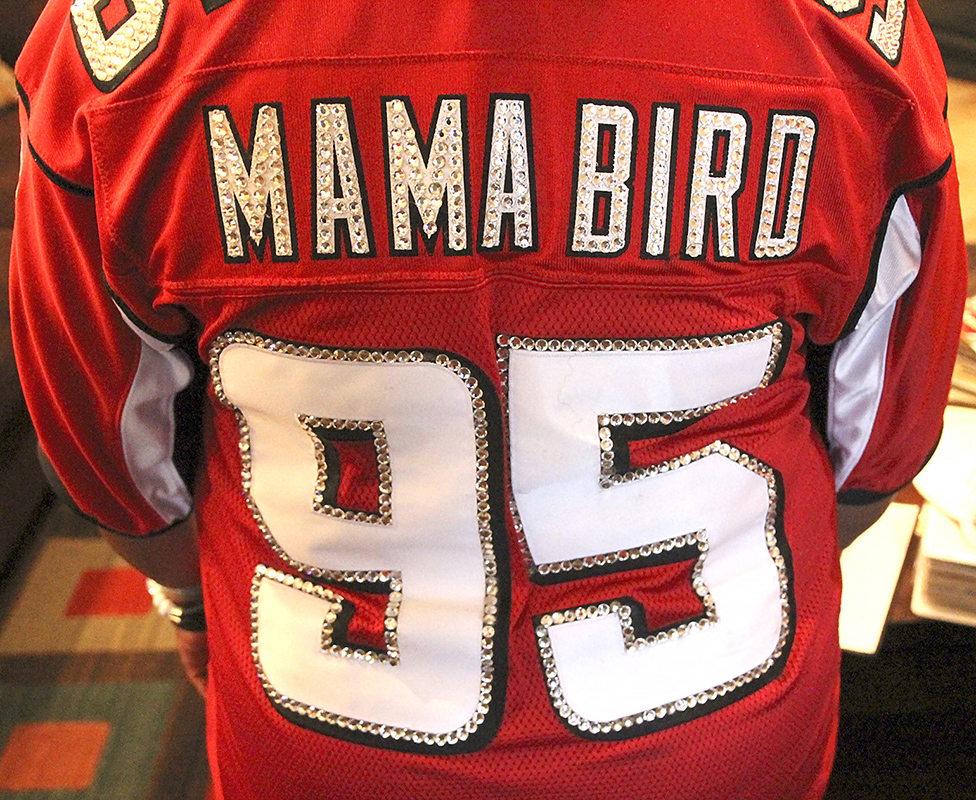 The nameplate on the back of Barbara Babineaux’s jersey reads “Mama Bird”, which is her nickname. Her sons Jordan and Jonathan Babineaux have played for the Seahawks and Falcons, respectively. (I.C. Murrell/The News)

Barbara Babineaux and Mary Bryant know firsthand how their sons, both Atlanta Falcons players, feel about reaching the Super Bowl for the first time.

“Jonathan is a very humble, quiet person,” Barbara said. “His thing is, whether he makes it to the Super Bowl or not, it’s all good. He’s had a long career.”

Mary Bryant said her son Matt contains his emotions inside as well.

“You wouldn’t know a whole lot inside,” she said. “I’m sure it’s everybody’s dream. Matt is real quiet. He doesn’t say very much. He’s not jumping over the roof, not on the outside.

For defensive lineman Jonathan Babineaux of Port Arthur and kicker Matt Bryant of Bridge City, there’s still an item of business both are attending to — trying to win the Super Bowl.

On the other side, Stephanie Roberts of Port Arthur is more than likely anticipating getting to see her son, Elandon Roberts, help the New England Patriots thwart the Falcons’ attempt at winning their first world championship.

The Super Bowl will be contested next Sunday in Houston for the third time (1974, 2004), but this edition, which will be held inside NRG Stadium, adds another meaning to the word “local” for Port Arthur and Bridge City.

For the first time since 1983, two graduates from the Port Arthur ISD share the same Super Bowl field. Lincoln High graduate Joe Washington was a running back on the winning Washington Redskins team that beat Stephen F. Austin High grad and wide receiver Duriel Harris and the Miami Dolphins in Super Bowl 17 in Pasadena, California.

Babineaux and Roberts are the eighth and ninth Port Arthur ISD grads to play in the Big Game. Thomas Jefferson High alumnus Jimmy Johnson coached the Dallas Cowboys to victories in Super Bowls 27 and 28.

Next Sunday will also mark one year since Memorial High School received eight golden footballs from the National Football League, each one in honor of a player or head coach from the PAISD who participated in the Super Bowl.

This won’t be Barbara Babineaux’s first rodeo watching a son in football’s championship game. Jordan Babineaux, who graduated with Jonathan from Lincoln in 2000 but is younger, played with the Seattle Seahawks in Super Bowl 40. That ended in a loss to the Pittsburgh Steelers.

“I just remember all the excitement, meeting new people and new friends,” she said. “The people who are part of the Falcons, they have congratulated me for Jonathan being a part of the game.”

The brothers’ stints with the Seahawks and Falcons have earned their mother the nickname of “Mama Bird.”

Jonathan, 35, has spent his entire 12-year career with the Falcons. The Iowa graduate was a rookie when Jordan made it to Detroit for Super Bowl 40.

Barbara Babineaux said those connected with the Falcons felt Jonathan was very deserving of his spot in a game that is usually the most-watched live television event of the year.

Matt Bryant, at 41 the oldest player on the Falcons, has waited a little longer in the NFL for his moment.

Born overdue and surviving on his own fat cells, he’s been a kicker since his days in the local youth league, following in the footsteps of older brother Kim.

“Then, you scored two points if you kicked the ball and one point if you ran the ball [into the end zone after a touchdown],” said Mary Bryant, a mother of four with Matt being the youngest. “Matt kicked and did real well. My oldest son was a good kicker, too. But when he went through, kicking wasn’t that cool.

“Matt kicked, but he was also a middle linebacker, too.”

A 1994 Bridge City High grad, Bryant took a long road to the NFL. He started at Trinity Valley Community College on a football scholarship and then went to Panola Junior College for baseball before returning to Trinity Valley, his mother said.

“Neither school played both sports,” Ms. Bryant explained. “I think baseball was actually Matt’s first love. He was very good. But Casey, my husband, was the one who said, ‘Matt, you’re going to go farther in football as a kicker than you would probably in baseball.’ However, I think Matt would have made the pros in baseball.”

He finished his collegiate career at Baylor in the 1998 season but was not drafted into the NFL. He tried out for a number of teams while working at a pawnshop in Orange, but earned his first taste of regular-season professional action with the Berlin Thunder of the now-defunct NFL Europe in 2002.

He finally earned a spot on the New York Giants later that year and spent two seasons there. He also played for the Indianapolis Colts and Miami Dolphins in 2004 before spending the next four years with the Tampa Bay Buccaneers.

The Falcons landed Bryant in 2009, and now he’s the franchise’s all-time leading scorer.

Mary Bryant said of Matt’s journey: “It hasn’t been a bed of roses, but it’s been a wonderful experience.”

Bridge City faithful will get to root one of their own with the Falcons for a second time. Shane Dronett was a defensive lineman for the Dan Reeves-coached team that upset the Minnesota Vikings in the NFC championship game of the 1998 season, but lost Super Bowl 33 to the Denver Broncos in quarterback John Elway’s last game. Dronett died in 2009.

The only other Bridge City Cardinal to make the Super Bowl is Jason Mathews, who was an offensive tackle on the Tennessee Titans, who narrowly lost to the St. Louis Rams in Super Bowl 34. Mathews’ brother Jeff is the head football coach at Vidor High School.

Contact information for Stephanie Roberts was not available. Her son Elandon, a rookie linebacker for the Patriots, is the first Memorial High School graduate to reach the Super Bowl. Elandon finished at Memorial in 2012 and was drafted from the University of Houston last April in the sixth round.

The Babineaux and Bryant families have met before at Falcons home games, and the matriarchs think highly of each other. This time, they don’t have to go very far along Interstate 10 to cheer on Jonathan and Matt in another “home” game of sorts.

“I always tell him to do his best, get that fumble or hit that quarterback,” Barbara Babineaux said of Jonathan, who’ll attempt to bring down four-time champion quarterback Tom Brady.

The mothers will take in the Super Bowl experience later this week. Barbara Babineaux plans to take her grandchildren to the NFL Fan Experience, which allows kids to play, practice skills and meet former players.

Meanwhile, she’ll continue to prepare and “get her mind right” for the Super Bowl.

What role will she play?

If Mary Bryant has one regret this week, it’s that her husband Casey, who died of Lou Gehrig’s disease seven years ago, won’t get to see Matt play in the Super Bowl in person.

She won’t, however, have to worry about the hustle and bustle of finding a room in the Houston area. She’ll arrive in the big city Friday to have dinner with Matt and his wife, Melissa, who are handling the lodging arrangements.

“We’re excited for him that he’s getting to play in the Super Bowl,” Ms. Bryant said. “… It’s been a long time coming.”