Ringing in the New Year with lions and firecrackers 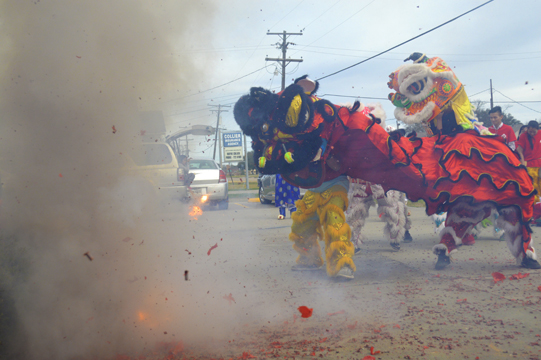 Linda Truong, owner of Miracle Touch Studio, hosted a traditional lion dance at her place of business on Nall Street. The weather was brisk and the winds were cutting; yet, Truong’s parking lot was occupied by the cars and trucks of family, friends and customers who came to see the festivities.

“Many people know it as Chinese New Year, but it’s really the Lunar New Year,” Truong said. “It’s celebrated in most of Asia; it’s not just a China thing — this has been a celebration for more than a thousand years.”

The dance troupe, comprised of members from the Vietnamese Eucharistic Youth from Queen of Vietnam Church, bobbed, weaved and hopped in discordant unity as they danced to the rhythmic beat of drums and stepped lively around the gunfire pops of the firecrackers at their feet. 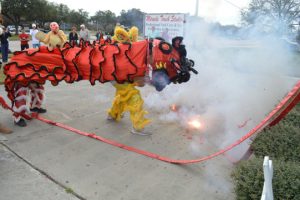 Truong, who has been in business for 13 years, said it was the third year that she has held such an event; and, it was something that held meaning for her.

“The Lion is strong and powerful, but in the dance, they bow in front of you,” Truong said. “It makes you feel powerful and strong. It also gives you luck.”

Truong listed traditional customs like the wearing of new clothes, maintaining a clean house and not working as some of the conventions that people observe for the New Year. 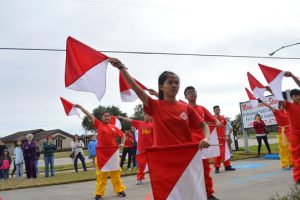 Of note, 2017 is the year of the Rooster in the Chinese New Year. And while the traditional meaning of that may vary from place to place; for Truong, it meant something more personable.

“To me, the Rooster is a good animal because it gets up at sunrise and it has a good energy to it. It works,” Truong said.

But she was also quick to say that the particular type of animal was not as important as what the person believed.

“To me, we go by the moon. There’s 12 cycles, and the animals in the Zodiac go through those cycles. I believe every year will be better for me,” Truong said.

Truong’s daughter, Jennifer, was also out in the parking lot with family and friends.

“My favorite part of this is that it really celebrates family and brings in good luck,” she said.

Prior to the event, Truong gave out what she termed “lucky money” that was placed in red envelopes to children who came to watch the dances. In return, the young recipients said something good to her.

“In the New Year, we give money to little kids in the spirit of health and good fortune,” Truong said.

Longtime customers were also present to watch the dance and to show their support for their local nail lady.

“Linda does my nails, and her and her children are all wonderful,” Beth Horne, patron for 13 years, said.

Horne said it was her first time to see the lion dance and she thought it would be wonderful. 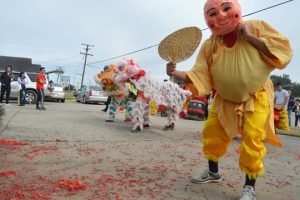 The annual celebration even brought out the mayor of Port Neches, Glenn Johnson, as he watched the spectacle from the comfort of his own vehicle.

“I’m here because we have a business here in Port Neches, and I support all our businesses and employees,” Johnson said. “And I want to show our appreciation for all they do.”

Johnson said he was thrilled to see the lion dancers.