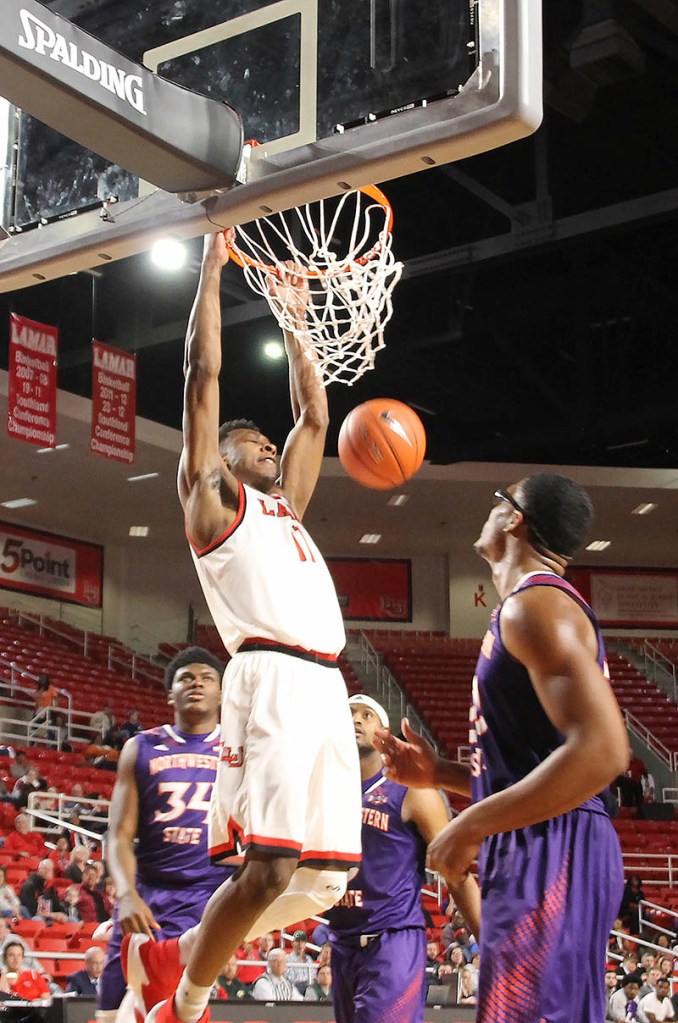 BEAUMONT – The Lamar Cardinals jumped out to a 9-0 lead over Northwestern State and never looked back. The Cardinals defeated Northwestern State, 85-64, Saturday afternoon at the Montagne Center. The victory evened the Cardinals record on the current home stand to 1-1 (.500), as the Red and White proved for the second time this season its ability to bounce back after a heartbreaking overtime loss.

“I can’t say enough about our guys’ ability to bounce back,” said LU head coach Tic Price. “We’ve had some disappointing losses, but this is a very determined group. This was a group effort tonight. Both Colton [Weisbrod] and Josh [Nzeakor] provided us with a strong inside game. Nick Garth came off the bench and knocked down some timely threes in the second half.

“Northwestern is a good team. They were coming off two very impressive wins. They were coming in here with a lot of confidence, but I thought our guys stayed the course closing out the game. We knew they were going to make a run, and we had to regain our composure and we did that,” added Price.

The Cardinals (13-9, 5-4 Southland) finished the game shooting 55 percent (33-of-60) from the field riding the strength of a 17-of-27 (.630) second-half effort. In addition to their offensive production in the second half, the Cards also outrebounded Northwestern State by 18, a stat which included 13 offensive boards.

A huge reason for the Cardinals success offensively was a direct result of its defense. LU forced Northwestern State into 18 turnovers, which they converted into 30 points. The Cardinals dominated every hustle stat finishing the day with a 46-21 advantage in points in paint, plus 16 in points off turnovers, plus eight in second chance points, plus 11 in fast break points and plus 20 in bench scoring.

LU shot the ball better in the second half but it was their performance in the first that gave the Cardinals what turned out to be an insurmountable lead. Led by 11 first-half points from sophomore Nzeakor, the Cardinals pushed the lead to 17 points with 7:26 remaining in the opening half. The lead would jump to as many as 20 before the Cardinals took a 17-point lead into the locker room, 42-25.

The second half appeared to be more of the same as the Cardinals pushed their lead to 21 points two minutes into the half, and appeared to be going for the knockout punch.

Following the 21-point gap, the Demons strung together their best 4:30 of basketball cutting deficit down to just seven with more than 13 minutes remaining. The Demons’ Sabri Thompson sparked the 19-5 run with his 11 second-half points. Thompson was one of three Demons in double figures Saturday.

The run came to an end following a Jordan Bell three to trim the advantage to 53-46. The Cardinals responded on the next possession with a jumper in the paint from sophomore Dorian Chatman, and a layup from Weisbrod pushing the lead back to double figures.

Those two plays ignited a 16-2 run putting the game out of reach. Just as quickly as the Demons had made it interesting, the Cardinals took their guests out of the game giving the crowd, and the former coaches, players and administrators who took part in the LU men’s basketball reunion another reason to stand up and cheer.

While Nzeakor (17 points and seven rebounds) and Weisbrod (18 points and nine rebounds) helped the Cardinals build a double-digit lead in the first half, it was the exploits of sophomore Nick Garth who helped LU regain that advantage in the second. With almost the exact same stat line as last week’s game at Nicholls, Garth scored 15 of his game-high 18 points in the second half. He knocked down five of his six three-pointers in the game’s final 20 minutes.

Junior Zjori Bosha also added 10 points on 5-of-7 (.714) shooting. Bosha also had an impact on the other end of the floor grabbing three rebounds, recording two steals and dishing out two assists. Senior Marcus Owens also continued his surge offensively knocking down 3-of-3 first-half three-pointers and finishing the game with nine points.

“Zjori does a lot of work that doesn’t always show in the final stats,” said Price. “We as coaches know what he does. He is getting his hands on a lot of balls deflecting passes and grabbing rebounds.”

The Cardinals return to action Saturday when it hosts rival McNeese State. The game against the Cowboys is slated to tip off at 4:30 p.m. (or 30 minutes or following the conclusion of the women’s game) at the Montagne Center.