PREP ROUNDUP: Titans pay back Jaguars, tie for first in District 22-5A 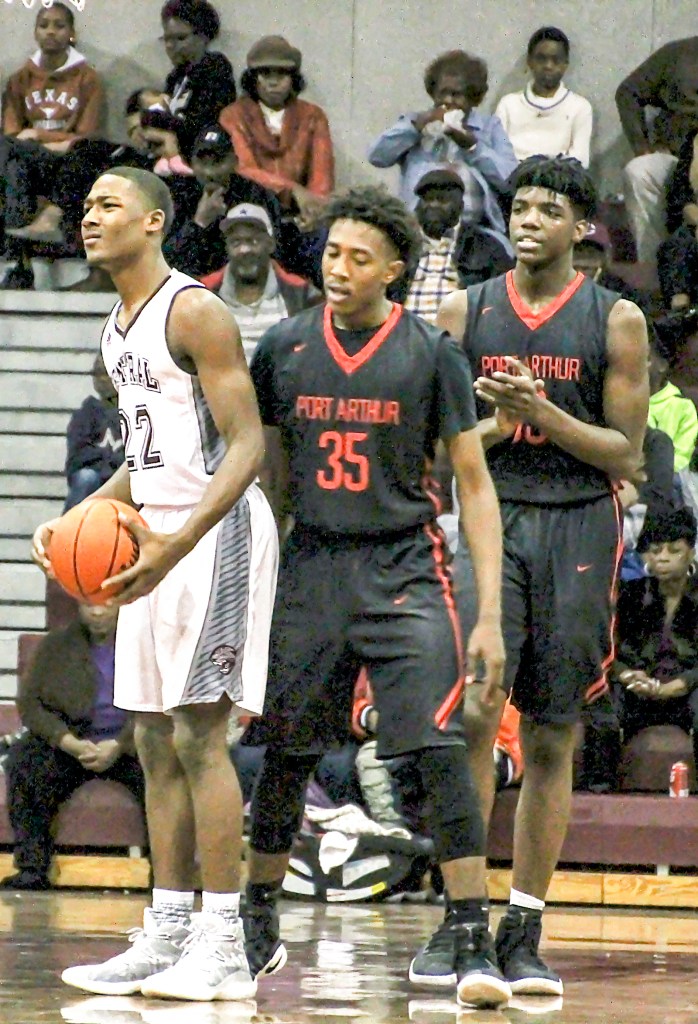 Thailan Wesley (35) and Nathan Clover of Memorial make a defensive stop as Tyrone Brown of Central reacts to a call late in the first half of Friday night’s game in Beaumont. (I.C. Murrell/The News)

The News staff report and The Orange Leader

But they really had to have this one.

Thailan Wesley scored 20 points, and Memorial exhibited a standout effort Friday night in picking up a 66-57 win at Central, handing the Jaguars their first loss in District 22-5A this season. The win also ties Memorial (20-5, 8-1) with Central (17-8, 8-1) for first place in the district.

Darion Chatman finished with 17 points and Reao Keller threw in 10 points for the Titans, who lost to Central 64-62 in Port Arthur on Jan. 4. A week later, Memorial pulled out a 68-67 win over Ozen, ending a three-game skid to the Panthers.

Memorial will host Lumberton on Tuesday and visit Ozen next Friday.

LUMBERTON — The Bulldogs nearly finished with two double-doubles on the road Friday night, but picked up another victory to inch closer to a playoff berth.

Darrell Jones had 16 points and 10 rebounds, and Kevin Howard finished with 17 points and nine boards for Nederland (22-8, 5-4 in 22-5A). Logan Foster had nine points and Reid Garrett eight for the Bulldogs.

The loss pushed Lumberton (7-17, 2-7) three games behind Nederland for fourth place in 22-5A. Nederland hosts Ozen on Tuesday.

PORT NECHES — Courtland Pender brought a hot hand with him to The Reservation.

Ozen’s standout guard hit five of his seven three-point baskets in the first quarter and finished with 29 points as the Panthers (17-7, 7-2) routed the Indians (6-17, 2-7). Pender finished his scoring in the third quarter, when he had 12 points, including the other two three-pointers.

All 11 Ozen players in the scorebook scored at least four points. Derrian Jones was the closest to being the second Panther in double figures with eight points.

Hunter Curtis had nine points and Haden Wiggins eight for the Indians, who finished with three treys. The Panthers totaled nine.

ORANGEFIELD — The Orangefield Bobcats snared their first District 22-4A win of the season Friday night as they blew past the Hamshire-Fannett Longhorns 69-46 at Bobcat Gym.

Four Bobcats scored in double figures as Orangefield improved to 9-13 overall and 1-4 in 22-4A play.

Payton Lathrop and Wesley Frillou led the Bobcats with 14 points apiece while Caleb Kress and Alex Catt chimed in with 13 apiece.

Lathrop had eight rebounds for the Bobcats. Kress had seven boards while Blake Bradley had seven and Catt six.

WEST ORANGE — In what was a wild affair, the Little Cypress-Mauriceville Bears went on the road and snagged sole possession of second-place in the District 22-4A race by taking down West Orange-Stark 64-59 in an amazing triple overtime game at Mustang Gym.

Both teams went at it all night on both ends of the floor. Each team had shots to win it at the end of regulation and the first two overtimes but each squad got it done with some defensive stops.

However, it was the Bears (18-11, 4-1) that had the answers in the third session as guards Ayson Simmons and Braden Bridges played huge.

WOS guard K.J. Miller put the Mustangs (8-11, 3-2) up 55-53 with a nice drive. Simmons promptly answered on the other end with a slashing drive as well to tie it. Simmons would eventually nail 3 of 4 free throws and Bridges sank four straight charity shots as the Bears were able to hang on for the victory.

LCM forced a couple WOS turnovers down the stretch and survived a Jay’Len Mathews’ three-pointer that got WOS to within 60-59.

The game was tied at 53-53 entering the third overtime as neither team could score in the final 1:28 of the second extra session.

FANNETT — The Orangefield Lady Bobcats maintained second-place in the District 22-4A race with a 54-41 road win over the Hamshire-Fannett Lady Longhorns on Friday night.

Faith Fregia led the Lady Bobcats (5-2 in district) with 17 points and had six boards.

In Port Arthur, Robert Guzman accounted for both of Memorial’s goals in the team’s first win of the season.

PORT NECHES — Eleven different PNG players entered the scoring column as they issued a big shutout over Ozen in the District 22-5A opener.