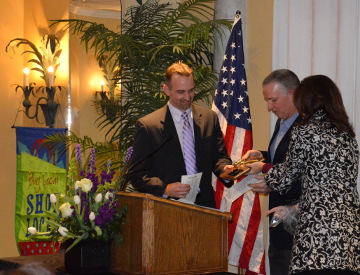 But the accomplishments wouldn’t be possible without businesses, the city and the chamber coming together. 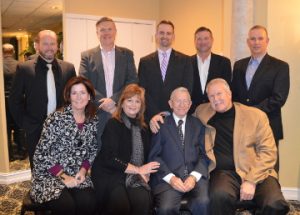 Port Neches Mayor Glenn Johnson was master of ceremonies of the Port Neches Chamber of Commerce’s 76th annual banquet, held at the Pompano Club on Thursday. He told the crowd of the importance of the partnership between the city, chamber and school district and that it takes volunteers to step up to make it happen. 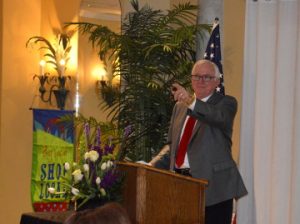 Port Neches Mayor Glenn Johnson shares some humor while serving as master of ceremonies during the banquet.
Mary Meaux/The News

Outgoing chamber president and police chief, Paul Lemoine, ended his two terms of service saying it was an honor and a privilege. Usually the role of president is a one-year term, but because another member was busy with his business, Lemoine volunteered for the second term.

“It’s been fun, but I will not stop participating,” Lemoine said. “And like the mayor said, it’s very important to participate.”

“It goes way back with my family,” Clotiaux said. His grandfather once served on Nederland City Council and his father was involved with the community of Jasper. “It’s just something you’re supposed to do, give back to the community.”

Plaia took the podium and gave an update on two projects that have been in the works — the formation of a goodwill ambassador group and a Student of the Month program.

Plaia became somber for a moment and her voice broke as she told of a woman who works with the chamber that has been diagnosed with cancer — Nan Gregg.

“She is probably one of the strongest women I’ve met, and she will still be around because she’s a survivor,” Plaia said.

Mary Marioneaux, a longtime volunteer, is stepping up to help Plaia while Gregg tends to her health concerns.

Clotiaux ready to take the rein as PN chamber president