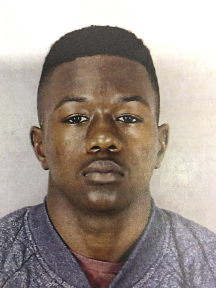 Port Arthur Police are seeking the public’s help in finding a man suspected in a number of shootings in the city’s West Side area.

The incident happened around 7:30 p.m. Dec. 13 at Louis Manor Apartments and left a 21-year-old man with non-life threatening injuries after a person fired about eight shots in the apartment complex.

“Angelle targeted the victim and shot at him multiple times striking the victim in the leg,” Hebert said. “Angelle fled the scene after the shooting.”

Angelle is a person of interest in multiple shootings in the city, and not all of the shootings resulted in people being shot.

“The motives behind the shootings are not clear, but what is clear is that each person shot at was targeted by Angelle,” he said.

Hebert said there was a town hall meeting held last week on the West Side at which police heard from people who expressed concern over the number of shootings in their area of the city.

Police said the suspect rarely acts alone during the commission of these shootings but he is almost always named as the lone shooter.

The most recent shooting in which Angelle was named as a suspect was on Jan. 26. The victim of this shooting sustained a gunshot wound. The motive behind this shooting is undetermined and the incident is still under investigation.

Hebert said it is crucial that Angelle is captured immediately to ensure the safety of the community. Angelle is considered armed and very dangerous. He should not be approached if seen. Instead, contact the PAPD at 983-8600 or Crime Stoppers at 409-833-TIPS.