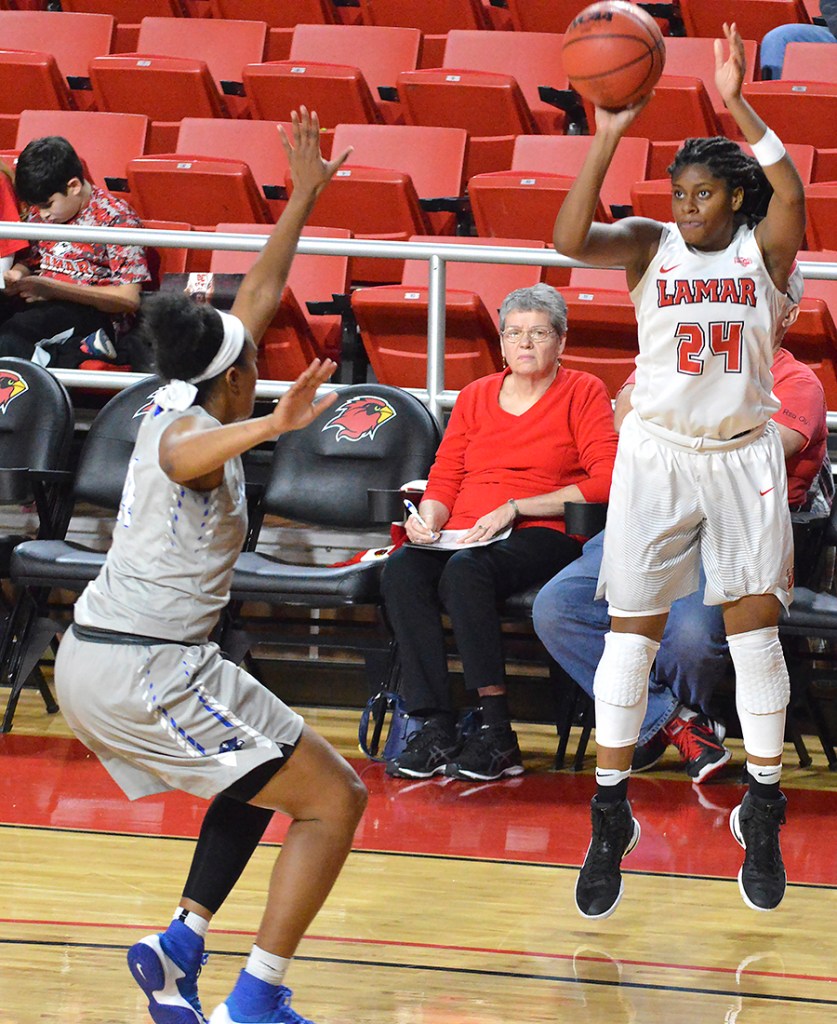 Ashlan Miles of Lamar pulls up for a shot against New Orleans on Jan. 5. (The News file photo)

BEAUMONT — The Lamar women’s basketball team plays its 400th home game in the Montagne Center when it hosts Northwestern State at 2 p.m. Saturday in a Southland Conference clash.

LU (13-5, 6-2 Southland) heads into Saturday’s game just a half-game behind conference co-leaders Stephen F. Austin and Abilene Christian, who are both 6-1 in SLC play. LU is tied for third place with Central Arkansas.

LU comes off a 65-49 home victory over Texas A&M-Corpus Christi on Thursday, in what LU coach Robin Harmony described as one of the best defensive efforts by her team this season.

The LU defense continues to remain tops in the nation when it comes to creating turnovers. LU forces opponents into an average of 25.44 turnovers per game. The Cardinals also rank first in steals per game at 14.3 and in turnover margin at plus 9.78. As a result, the Cardinals dominate in points off turnovers, averaging 26.7 points per game, while the opponents score 14.6 points per game off LU turnovers.

LU sophomore guard Chastadie Barrs continues to lead the nation in steals per game with an average of 4.5 per outing. Barrs has at least one steal in all 49 games in her career. Her 204 career styles already rank third all-time at LU.

Senior post player Kiandra Bowers also ranks among the nation’s best when pilfering the ball from opponents, ranking 28th with an average of 2.89 steals per game.

Bowers has been a dominant force on the offensive boards, pulling down 5.78 offensive rebounds per game to lead the nation. Bowers is 28th in the nation in rebounding at 10.1 per game. Bowers is also adept at putting the ball in the basket, ranking 13th nationally by connecting on 61 percent of her shots from the field.

LU averages 73.6 points per game on offense to rank 46th in the nation. Many of those points come thanks to Barrs, who averages 6.4 assists per game, good for 18th in the country.

Northwestern State (9-10, 3-5) is led by Beatrice Attura, who is second in the conference in scoring at 18.9 points per game.

Saturday’s game will be broadcast on KLVI-AM 560 and streamed on ESPN3. The contest is the first game of a doubleheader, with the LU men squaring off against Northwestern State at 4:30 p.m.