Event lots of fun with gumbo to boot 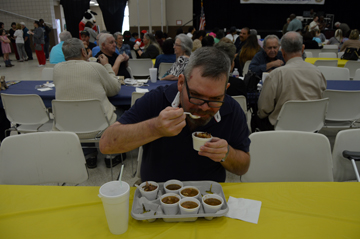 The Rotary Club of Port Arthur will host their Taste of Gumbo and Craft Show for the 31st year from 10:30 a.m. to 2:30 p.m. on Saturday, Feb. 11 at the Bob Bowers Civic Center in Port Arthur.

What could be more a more appropriate start to the Mardi Gras season than a Taste of Gumbo?

The Rotary Club of Port Arthur will host their Taste of Gumbo and Craft Show for the 31st year from 10:30 a.m. to 2:30 p.m. on Saturday, Feb. 11 at the Bob Bowers Civic Center in Port Arthur.

Janie Johnson, president of the Port Arthur Rotary, said they scheduled the event early this year so there would be no conflicts with Spring Break or with traveling.

“It really frees us up,” Johnson said.

Tickets cost $10 each with all the gumbo one can eat or until it runs out. It’s also free admission for children under 12. Tickets can be purchased from Rotarians or at the door.

There should be plenty to go around, however, since vendors use 30-gallon containers. Attendees may also buy a disposable tray for $1 and carry more bowls of gumbo at one time.

The money the Rotary collects goes to fund either their service projects or for grants to local organizations.

Many of the vendors are returning including The Schooner, Floyd’s, the Medical Center of Southeast Texas and different individuals and organizations. The Masons and the Interact Club of Bob Hope High School will help serve.

Additionally, this will be the third year for the craft and trade show.

Johnson said there will be more booths this year.

One booth she said she’s particularly interested in is Soutex Surveyors’s booth. They will have some drones on hand and they will let smaller children fly the small drones and the larger drones will be in a display case.

There will also be a silent auction and many door prizes to give away.

Other booths include Tupperware, skin care, the Cotton Patch that carries shirts and home décor, wind chimes and bird feeders made from wine bottles, Scentsy and wreaths.

“This definitely helps with our service projects,” Johnson said of the money they raise.

She cited as examples the Rotary’s involvement in scholarships for Lamar State College-Port Arthur, youth mentoring eight students for RYLA (Rotary Youth Leadership Awards) and a grant for an international project to dig water wells and a sanitation site in a community that doesn’t have safe water.

Another international project the Rotarians hope to finish this year is the battle against polio.

Johnson said the disease has been 99.9 percent reduced over the last 38 years.