Clotiaux ready to take the rein as PN chamber president 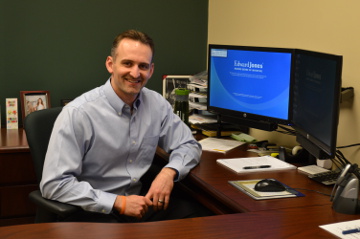 PORT NECHES — Olin Clotiaux learned a lot about community involvement from his family.

Other family members have also worked with their communities including a grandfather who passed away before he was born that was once on Nederland City Council.

Clotiaux is now set to take presidency of the Port Neches Chamber of Commerce during the 76th annual banquet on Thursday.

“Me and Debbie (Plaia, executive director of the PNCOC) were commenting on what a great group of people we have in the chamber. I plan to work as best as I can alongside Debbie,” Clotiaux said. “We run a pretty efficient ship.”

“He’s very enthusiastic and attends most of our functions and hosts one of our chamber networking coffees once a year,” Lemoine said. “He’s a young businessman with a great personality and fun to be around. I think he’ll make an excellent president.”

Clotiaux looks forward to this year’s RiverFest celebration and working with other chamber members on the popular festival.

Edward Jones financial advisors are encouraged to take part in community events and Clotiaux remembers his father did the same.

“My dad was part of the Jasper Lions Club and worked with the Jasper Lions Rodeo so I got to experience a part of a large event,” he said. “As soon as I came on board with the chamber I knew I would be part of RiverFest and my role is becoming bigger.”

Clotiaux said there’s a term he remembers from catering called the “swing man.” This is the person who is versatile and takes on different duties. In catering, that can be bartending, putting out the dance floor, serving food and even mowing the lawn.

He feels he will be able to be the swing man for Plaia and the chamber.

Plaia commended Clotiaux on his vision to continue to move the chamber forward with a strong relationship with the business community and the city.

The chamber also looks forward to the new partnership with Port Neches-Groves High School by sponsoring a student of the month program, which kicks off in February during the organization’s monthly networking coffee.