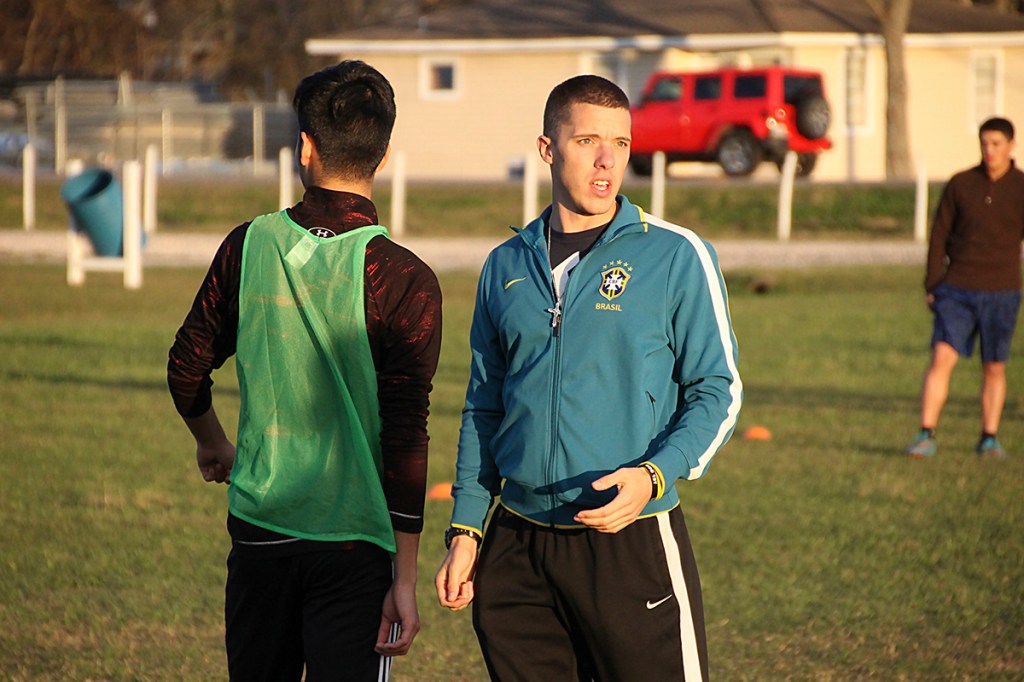 The Eagles would show improvement going into district play and test themselves against the nation’s second-ranked soccer program. Not only that, the student body would buy into the program so much, that it could sell two fan buses to Lafayette, La., in 20 minutes.

“I think we have a lot of buy-in here,” Morgan said. “They’ve seen the improvement. We feel like we have a shot.”

Bob Hope, a seventh-year charter school in Port Arthur, is preparing for its biggest soccer match to date: A battle against Covington (La.) St. Paul’s on Monday at the University of Louisiana at Lafayette. St. Paul’s is ranked second nationally by Maxpreps.com.

Why such a big task?

“We want to take this brand and we want to make it known,” Morgan said. “So, when we put it together, we actually asked [St. Paul’s] if they’d be interested in doing it, and they said, ‘Yeah, we’ll do it.’ The University of Louisiana at Lafayette has been gracious in letting us use their facility. The Gulf Coast [Youth Soccer League] has been gracious enough in letting us use their facility to train. So, everybody’s been able to help us out. Businesses have been able to work with us a little bit. All of it is pretty much coming together.”

More immediately, Bob Hope’s girls team (3-2-1) has a battle on their hands today when they visit 4A state runner-up Jasper. Coach Tiffany Noble’s Eagles will put a three-game winning streak on the line today.

“I’m very impressed with the girls,” Noble said. “They have outstanding ability. There are two girls on the team who take leadership, and they strive for the best. They strive to win every game.”

One of them, junior Jackie Cardenas, has recorded a hat trick in each of the past three games. And Noble said she’s anticipating what she and classmate Bibian Anaya will do this season and the next.

So far, the Eagle boys’ first season as a UIL team is on an upward trend, as they’ve gone unbeaten the past three games. The Eagles (2-3-1) have won two straight after posting a 1-1 tie against Central.

“A lot of the guys haven’t had a chance to play together,” said Morgan, a former National Guardsman from greater Memphis, Tenn., who previously coached at a private school in north Mississippi. “The PNG tournament was a strong tournament with strong teams. Since then, we’ve played a good team in Beaumont Central, a 5A school.”

Bob Hope has beaten Anahuac twice since that tie.

Following an 8-1 record as an independent team last year, Hernandez is not surprised with the Eagles’ early success in the UIL.

“At the beginning of the season, it was a little rough, but we’re starting to get over the hump,” Hernandez said. “Our coach has taught us to learn the little things, such as control the middle and just to have fun out there, too.”

Now, Morgan expects the Eagles will play in front of their biggest crowd yet. He’s heard St. Paul’s would bring about 750 fans to Lafayette.

Noble’s Eagle girls have their own upward trend going with three straight victories. This is the second stint for Noble, who took over just before the start of the season.

“Honestly, it’s just been practicing and trying to motivate each other as a team,” Anaya said. “We just all try to communicate with each other and try to play the ball the best way we can.”