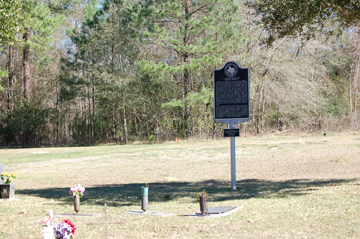 This is the historical marker at Forest Lawn memorial Park for Jiles Perry "J.P." Richardson Jr., better known as the Big Bopper. Tragically, he died in a plane crash with fellow rock stars Buddy Holly and Ritchie Valens.

BEAUMONT — Sadly, the Golden Triangle has a connection to the Day the Music Died.

Jiles Perry “J.P.” Richardson Jr. was born in Sabine Pass and grew up in Beaumont. He and fellow rock stars Buddy Holly and Ritchie Valens died in a plane crash on Feb. 3, 1959 in Iowa.

Though he never knew him personally, Sam Monroe, president of the Port Arthur Historical Society is familiar with him.

Richardson was working at KTRM radio station while Monroe was at KPAC. KTRM was No. 1 in ratings. Monroe said there wasn’t much fraternization then because of the competition.

Richardson had his own radio show where he developed the character, his alter ego, the Big Bopper. Off the air, Monroe said Richardson was actually shy and retiring.

In addition to being a singer, Richardson was a talented songwriter.

Richardson sang the phrase, “White Lightnin’” in the background on the song.

Richardson thought the hit would be the novelty song, “The Witch Doctor Meets the Purple People-Eater.” He was traveling in a car on Old Highway 90 between Beaumont and Liberty. His manager told him he needed something on the flip side of the record.

He told Richardson he ought to write a song about a guy talking on the phone to his girlfriend. Thus a hit was born.

Richardson also wrote “Running Bear” for Johnny Preston. It spent six months on the charts in 1960. In addition to being a hit in the U.S., it reached No. 1 in the U.K. and on the European continent.

Before his hit song became national, Preston was working as a clerk for the National Guard. His distributor from Kansas City ordered 15,000 copies of the record and told him he had to quit his job, get on the road and promote the record.

Preston had a wife and small children at home at the time, but he went on the road anyway.

Monroe said the song took off and it was a huge hit.

An interesting fact is the Indians chanting in the background of the song are the Big Bopper and George Jones.

Monroe asked singer and songwriter Don McLean if his song, “American Pie” was about the death of the three young men and the Day the Music Died.

McLean wrote back in a letter that is what the song is about. The letter is on display in the Museum of the Gulf Coast in downtown Port Arthur.

The text for 2006 Texas Historical Commission marker about the Big Bopper at Forest Lawn Memorial Park in Beaumont reads as follows:

Jiles Perry “J.P.” Richardson Jr. was born on October 24, 1930 to Jiles and Elsie Bernice (Stalsby) Richardson in Sabine Pass; the family moved to Beaumont when he was 6. As a teenager, Richardson began writing songs with country and western influences.

Following graduation from Beaumont High School in 1947, he attended Lamar College, where he sang in the choir and played in the band. He also became a disc jockey for radio station KTRM. It was there where his musical style shifted toward rockabilly, combining country and western with rock and roll.

He served two years in the Army but returned to radio work in Beaumont, and as a DJ in 1957 Richardson raised money for charity by spinning records continuously for more than 122 hours. Around the same time, Mercury Records executive Shelby Singleton signed him to a contract, and the Big Bopper went on tour along the East Coast.

His recording, “Chantilly Lace,” was on the top of the charts for six weeks in 1958 and earned him a gold record after being listed among the Top-100 for 25 weeks.

At the age of 28, married with two children, rock ‘n’ roll star J.P. Richardson joined a group of young musicians on another national tour. Tragically, on February 3, 1959, their plane crashed.

Richardson’s body was returned to Beaumont for burial. In addition to the 21 songs he recorded as the Big Bopper, he wrote many more made popular by other singers. Richardson is remembered for his musical talent as well as his larger-than-life persona, the Big Bopper.

Clotiaux ready to take the rein as PN chamber…