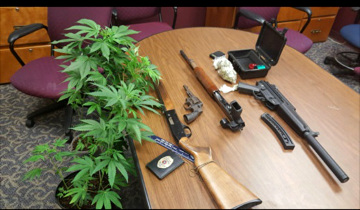 A Nederland teen is facing drug and weapons charges after reportedly being found in possession of marijuana and guns. Photo courtesy Jefferson County Sheriff’s Office

A Nederland teen suspected of selling large amounts of marijuana out of his home will face drug and weapons charges.

At around 6 p.m. Monday, a Jefferson County sheriff’s deputy stopped a vehicle with four white male teens at California and Spurlock in Nederland for an expired registration.

One of the teens, who is under the age of 17, was suspected of selling marijuana Monday. The vehicle was searched and the deputy found the teen with a black box containing marijuana and a loaded pistol, according to a press release from the Jefferson County Sheriff’s Office.

Jefferson County Narcotics Task Force went to the suspect’s residences, spoke with the occupants and asked for consent to search the teen’s bedroom. Inside the bedroom was a locked closet that deputies said had five marijuana plants, another pistol, a .22 caliber rifle, a pistol grip shotgun and a Port Arthur Police badge.

The teen was released to his mother and drug and weapons charges will be filed.

JSCO Deputy Marcus McLellan said the juvenile was not immediately arrested because the crimes are misdemeanors and were not violent crimes.