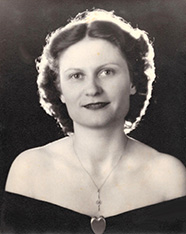 Gladys Evelyn (Memaw) Wukasch was born to Hermann Jentho and Esther (Noack) Jentho on March 28, 1921 in Winchester, Texas. She was baptized into the Kingdom of God at St. Michael’s Lutheran Church in Winchester, Texas on April 3, 1921 by Pastor
Alfred Bohot. On April 14, 1935 Gladys stated her faith in the Lord Jesus at the Rite of Confirmation at St. Michael’s with Pastor Louis Trinklein. Her confirmation verse:

Genesis 15:1 (NIV)
After this, the word of the LORD came to Abram in a vision: “Do not be afraid, Abram. I am your shield, your very great reward.”

Gladys grew up in Winchester and completed her education at St. Michael’s Lutheran School. On April 13, 1941 she married Albert Fritsche at St. Michael’s Lutheran Church by Pastor E. R. Rathgeber. Albert died after an illness on September 24, 1942. On January 9, 1946 she married Herbert Alvin Wukasch at Trinity Lutheran Church in Port Arthur, Texas by Pastor Carl Ladewig. They lived in Port Arthur and were blessed with three children, Herbert Jr., Sandra and Rita.

After her husband suddenly died in 1963, she and her family moved to Austin, Texas. Gladys became a member of Redeemer Lutheran Church on October 8, 1974. She was a bookkeeper for Buckner Villa Siesta and Monte Siesta and retired on March 1, 1992. She especially loved caring for her grandchildren and great-grandchildren. She was a special love of their lives.

Gladys was preceded in death by her parents, her husbands, her brother and sister-in-law, Curtis and Thelma Jentho, her brother-in-law, Dennis Hannusch and her daughter- in-law, Myrna Wukasch.

Gladys Evelyn Wukasch departed this life on Monday, January 23, 2017 at the age of 95 years.   Her life will be celebrated and cherished by her son, Herbert Wukasch Jr.; her daughter and son-in-law, Sandy and David Schroder; her daughter, Rita Rahn; her nine grandchildren; five great-grandchildren; her sister, Vera Hannusch and many other family and good friends and her brothers and sisters in Christ at Redeemer congregation.

Visitation will be on Wednesday, January 25 from 6 pm to 8 pm at Weed-Corley-Fish on North Lamar. Her funeral will be on Thursday, January 26, 2017 at 10 am at Redeemer Lutheran Church officiated by Pastor Kevin Westergren and Pastor Landon Ledlow. A graveside service will be held at Greenlawn Memorial Park in Port Arthur, Texas on Friday, January 27 at 2pm.

Memorials may be made to Redeemer Vision 2020 at Redeemer Lutheran Church.