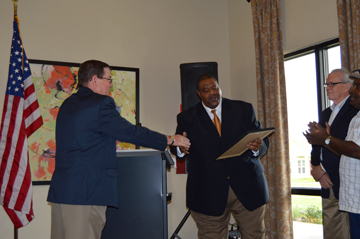 “It’s strange to me that Ike wiped us out and an Ike helped us to rebuild,” he said.

McCoy was referring to Hurricane Ike that devastated the area in 2008 in which Hurricane Ike recovery funds were used to rebuild. The other Ike McCoy referenced is the late Ike Akbari of ITEX Group whose company used those funds to build Edison Square.

ITEX partnered with the Port Arthur Housing Authority to build the complex.

“There was a lot of emotional things to this project,” he said. “It’s hard to talk about things we went through to develop.”

Akbari was referencing a past lawsuit filed against the project to stop it if it was to be a Multi-Family dwelling instead of a senior citizens complex.

A ruling was issued on July 14, 2016 by the Corpus Christi-Edinburgh 13th District of Texas Court of Appeals that overruled the lawsuit since it will be a senior citizens complex.

The complex will be a 78-unit community for people age 62 and older.

Akbari said it’s nice to have a development in inner Port Arthur rather than on the outskirts of the city near either Nederland or Port Neches.

“So many believed it could happen,” he said. “My father saw the vision of the mayor and the city council had to find a way to redevelop. Low-income people deserve a nice place to live. I want to carry on the mission of my father and of my family.”

“We want to continue to bring this type of development to Port Arthur.”

In addition to the PAHA, Akbari also recognized the South East Texas Regional Planning Commission and funding from Jeff Krozur of the Texas General Land Office for their efforts.

Akbari concluded by saying Port Arthur is a special place for him and it will always be home.

Mayor Derrick Freeman said it’s been a blessing in his life to know Ike Akbari and if he were there that day he would be smiling.

“He knew greatness was on the horizon. Some innovation was on the way,” Freeman said. “This is excellent for this neighborhood. Not many (complexes) are being built on this side of town.”

Former mayor, Deloris “Bobbie” Prince, who was responsible for getting the project underway, said Ike Akbari put his heart and soul into this project because he knew an aging population needs housing in Port Arthur.

“This will be an enhancement to the neighborhood and to the city of Port Arthur,” Prince said. “I loved Ike and he knew I loved him.”

Shaun Davis, executive director of the SETRPC, told Prince, “We’ve made it, mayor. I wondered if this day would ever come.”

“We’re fortunate to have ITEX deal with this because I don’t know if anyone else would be tough enough to finish.”

Davis said this is the last project to be built using Hurricane Ike Recovery funds.

“There has to be a seed,” he said. “Mayor Bobbie Prince said we’ve got to do something about public housing in Port Arthur. She pushed us and she pushed us.”

Cele Quesada, executive director of the PAHA, said it took three years for Edison Square to be completed.

He cited a study from Harvard University where one-in-five senior citizens in the U.S. is in need of housing. In 20 years, that need will increase t o one-in-three.

Port Arthur, however, is ahead of the curve, he said.

Additionally, a vacant lot on the property could house 20 additional units. Quesada said he would like to see some kind of partnership with construction training programs and the schools where the students would eventually build those units.