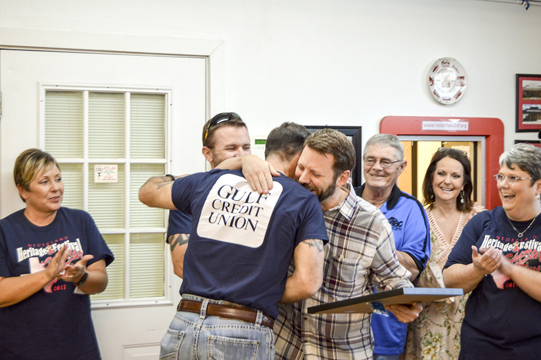 Shannon Hemby, executive director of the Festival, described the event as a way to get folks together.

“The Mixer is a meet-and-greet for Mr. Nederland and for some of our sponsors, along with a book dedication and announcing the new Mr. Nederland,” Hemby said.

Hemby detailed some of the selection process for the annual honor.

“Former Mr. Nederlands come together and bring their criteria for those parties who donated their time to the community… and then one or two of their nominations are brought to the executive board for a decision.”

Hemby admitted that while sometimes it was hard to decide on just one, this year’s honoree was easy to pick.

“This year’s Mr. Nederland is a wonderful guy,” she said. 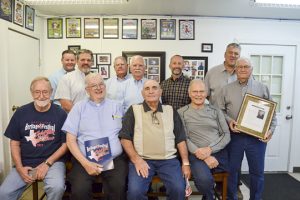 And while it was Hemby’s first year to serve as executive director for the Festival, it certainly was not her first time to serve with the event.

“I have volunteered with the Festival for 22 years,” she said.

In speaking of the Festival’s growth, Hemby seemed positive.

Hemby stressed the importance of getting newer generations involved with volunteer and community work, as well.

“To me, it means hometown values and (how) Nederland is kind of like a big family,” Hemby said when asked what the Heritage Festival meant to her.

In Hemby’s opinion, the Festival and turnout from its community has only grown in the years since she started volunteering with the event.

“When I first started, there were around 25 volunteers,” Hemby said. “Now there are upwards of a 100 people taking part. These are people who dedicate their time and take vacations just to work here.”

The 2017 chairman of the Festival, Todd Hollier, also spoke of the growth of the annual Festival.

“We see it all the time,” Hollier said of the annual turnout. “Nederland’s landlocked in size, but we see changes in the vendors and the crowds.”

Hollier commented on the legacy of such a large festival.

He said how special it was to recognize someone from 10 years ago now walking with their own children to the event.

Among the festivities of the annual gathering, Hollier stressed the charity work the Festival does as well.

“We’re a nonprofit organization. We donate back to the community,” Hollier said.

Both Hemby and Hollier said the Festival donates to the police department, the fire department, city parks, dogcatchers and the pageant and junior volunteer scholarships.

“It’s an amazing opportunity to give back to the community,” Hollier said.

In addition, Hollier said, being part of the Festival was a great way to meet new people and he has made friends for life through it.

The 2017 program was dedicated to brothers Caylan and Brelan Daughrity.

“These guys are our event sound,” Hollier said. “Every day they ready the stage for the night’s entertainment. They run sound for the event. It’s a lot of work.”

Hollier said they would not be able to have the caliber of talent they could get without the exceptional work of the Daughrity brothers.

“They always give more than could ever be expected for the organization,” Hollier said. “This is for their knowledge, their dedication and their hard work to make the (event) a success.” 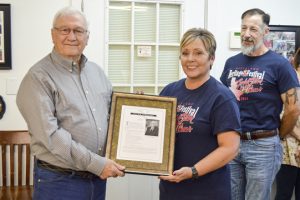 “He is so generous and kind and giving,” Hemby said to the gathered audience.

“I’m truly surprised. I hope to represent Nederland well,” Albanese said. “I hope I can live up to the name.”

Speaking in private, Albanese said it was a great honor. When asked what makes Nederland special to him, he said, “It’s just a great town to live in. I enjoy the people.”