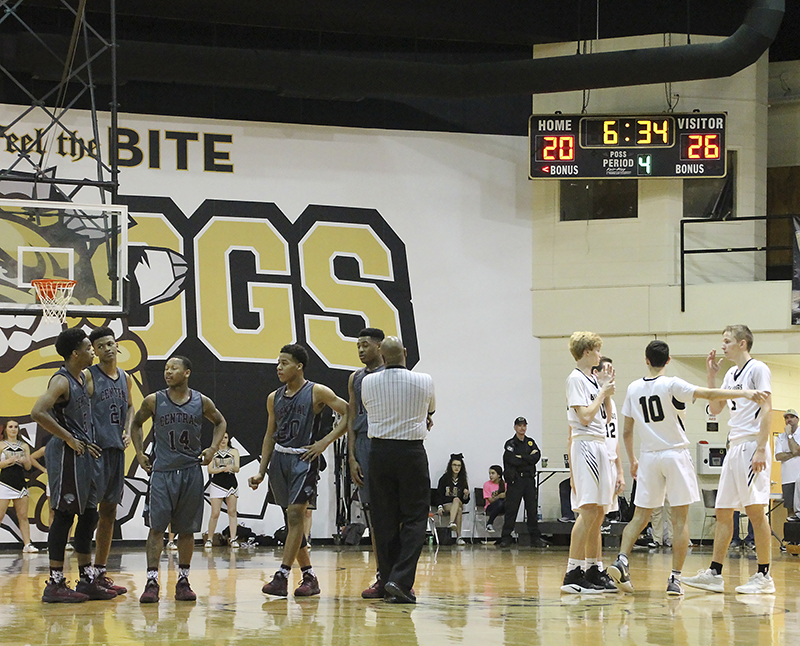 Central (in gray) and Nederland players huddle during technical foul shots as the scoreboard reflects a low-scoring game in the fourth quarter Tuesday in Nederland. Central, the District 22-5A-leading team, came away with a 38-32 victory. • Prep roundup, B1 (I.C. Murrell/The News)

Clover used his 6-foot-6 frame to block at least 10 shots to go with a career-high 16 points Tuesday as Memorial routed Vidor 73-37 at home.

Thailan Wesley led the Titans with 21 points. Ashur Fondren had 19 points for Vidor.

NEDERLAND — The Bulldogs did their job defensively, but failed to capitalize on the offensive end.

The Bulldogs shot 11 for 40 from the floor, nearly leaving coach Brian English at a loss for words.

“It’s hard to explain,” he said. “If you shoot that poorly, you’re probably not going to win many games. That’s not the first time we shot it poorly against them. Both times, we shot poorly.”

Central made 11 of 15 free throws in the fourth quarter and ran a stall offense for much of the fourth period to preserve the win. Byron Arceneaux had nine points, all on three-point baskets, to lead the Jaguars.

By the end of the third period, Sabine Pass’ victory was all but decided when they held a 47-33 lead.

The Sharks shot 53 percent from the floor.

LIVINGSTON — The Indians dropped their fifth straight game after the Lions nearly ended up with four players in double-digit scoring.

Cameron Merchant sank four three-point baskets, on his way to 19 points. Jae’Vionne Green had 17, while Josh Staples and Kyler Franklin each finished with nine.

The win allowed Livingston (5-17, 3-5) to pull within a game of Nederland for the fourth and final playoff spot in 22-5A with six games to go. PNG (6-16, 2-6) fell two games behind Nederland, but got a strong performance from Hunter Curtis with 19 points. T.J. Jordan and Haden Wiggins each scored eight for the Indians.

BRIDGE CITY — Emmi Lummus came up with 12 points and 10 rebounds, but was very impressive on defense with seven steals in leading the Bobcats past the Cardinals.

Faith Fregia totaled 11 points, Paris Fregia had eight points, two steals and four assists, and Skylar Matson nearly struck a double-double of her own with eight reboinds and nine steals to go with three points.

In Port Arthur, five different players scored for the Eagles in a rout of Anahuac.

Bob Hope faces Cleveland on Friday and will travel to Lafayette, La., to take on Covington (La.) St. Paul’s on Monday. St. Paul’s is ranked second nationally by Maxpreps.com and first in Louisiana.

In Port Arthur, Jackie Cardenas sparked the Eagles’ third win in a row with her third hat trick in a row.

Bianca Anaya also scored three goals, and Esme Cruz and Cynthia Ochoa each added a goal for Bob Hope. The Eagles take on 4A second-ranked Jasper on Friday.

NEDERLAND — Haley Dugas and Madison Ledet each struck a goal in the second half, and Nederland improved to 6-0-1 on the season.

Meg Sheppard assisted on Dugas’ goal. Dugas made the dish to Ledet.

Nederland will begin District 22-5A play at 7:30 p.m. Friday at home against Lumberton.