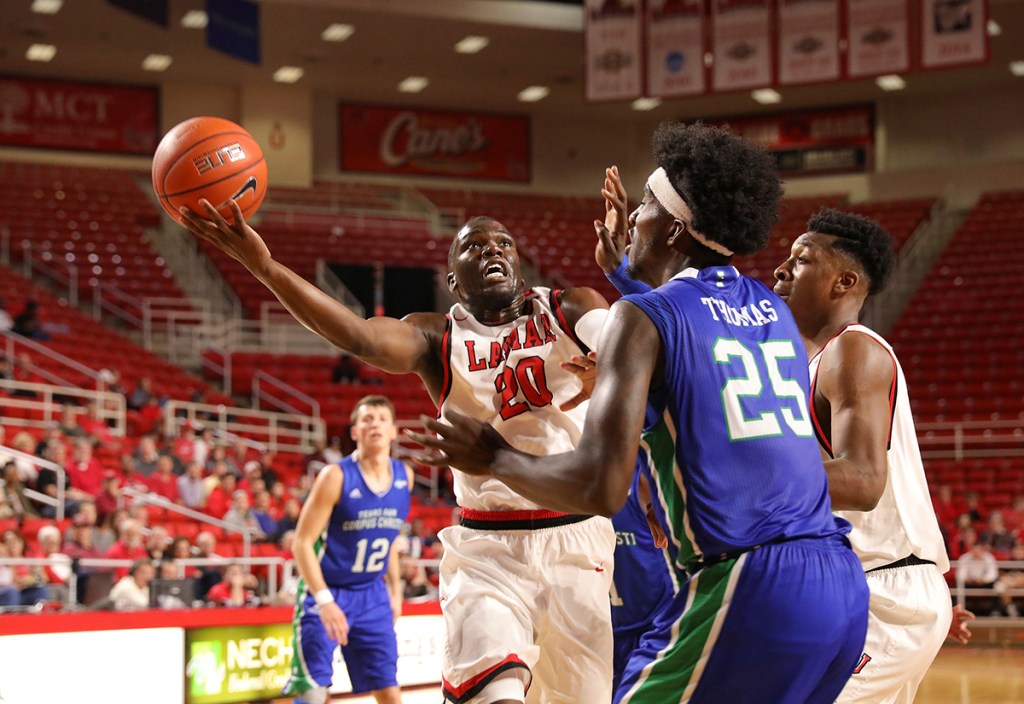 Marcus Owens of Lamar drives to the basket against Texas A&M-Corpus Christi on Wednesday in Beaumont. (Jeff Kellum/Lamar sports information)

BEAUMONT – For the second time this season the Lamar men’s basketball struggles from the free throw line and the misses would come back to haunt LU in overtime. The Cardinals (12-9, 4-4 Southland) dropped a three-point decision, 69-66, to Texas A&M-Corpus Christi Wednesday evening at the Montagne Center.

The Cardinals shot nearly 42 percent for the game, including 11-of-21 (.524) in the second half, but similar to the game against New Orleans, LU was hurt at the free throw line. The Cardinals connected on just 5-of-14 (.357) attempts from the stripe. LU overcame its size disadvantage in the post to outscore A&M-Corpus Christi, 38-18, in the paint.

A&M-Corpus Christi finished the night 23-of-56 (.411) and took full advantage of their opportunities at the stripe knocking down 15-of-16 (.938) attempts. The Islanders also won the battle of the boards outrebounding the Cardinals, 42-34.

The Cardinals were led by four players in double figures, including a team-high 14 points and seven rebounds from junior Colton Weisbrod. Sophomore Josh Nzeakor added 10 points and pulled down eight rebounds. LU also got 12 points from junior Zjori Bosha and senior Marcus Owens.

“You never like to lose, but I hate losing a game that way,” said LU head coach Tic Price. “I thought Texas A&M-Corpus Christi was the scrappier team tonight. We didn’t defend well in the second half. When you don’t defend, don’t fight on the boards and can’t hit free throws you make it tough on yourself to win games.

The game never saw a lead larger than eight points and that came early in the first half. The contest also saw five ties and 13 lead changes.

After trailing for almost the first 11 minutes of the contest, Owens gave the Cardinals their first lead of the night with a three-pointer at the 9:11 mark. It would be one of four triples for the Fort Lauderdale, Fla., native who has been struggling offensively this season.

The three-pointer capped a 12-3 LU run, but the Islanders responded by building their advantage back to five points. Big Red fought back to take a three-point lead into the locker room, 31-28.

The second half was very similar to the first but the Cardinals managed a five-point lead, 53-48, with less than 7 minutes remaining. A&M-Corpus Christi fought back to surge ahead by a point with 59 seconds remaining, 60-59, when LU found Weisbrod under the basket. The Nederland native was unable to score but did draw the foul. He hit the first free throw but missed the second, and A&M-Corpus Christi was unable to connect on the other end, sending LU to its second overtime game of the season.

The Cardinals took the first lead of the overtime on a Weisbrod basket and had consecutive possessions to add to the lead but couldn’t get their layups to fall. A&M-Corpus Christi took its first lead of the overtime on a Jake Kocher three-pointer with 2:32 remaining, 65-64. Kocher followed with another basket to get the lead back to three, 67-64. Junior Joey Frenchwood pulled the Cardinals within a point with less than 90 seconds to play, but the Islanders’ Ehab Amin put the finishing touches on the game with two free throws with only 14 seconds remaining. The Cardinals were unable to score on their final possession.

Big Red will look to get back in the win column Saturday when it hosts Northwestern State. The game against the Demons is slated to tip off at 4:30 p.m. from the Montagne Center.