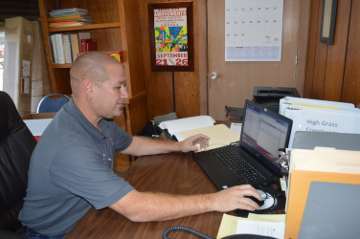 Spring cleaning starts early in Groves; with enforcer, people could get tickets for yard parking

GROVES — For the past 10 years the City of Groves has worked to improve the peace and dignity of its neighborhoods using incentives and enforcing its code of ordinances.

This has stepped up considerably with the hiring of a code enforcement officer who is tasked with, among other things, dealing with off-street parking.

The parking of a vehicle or trailer in the front or side yard of a residence if prohibited unless the parking space is a hard surfaced area, according to information from the city. The surfaced area must be completely on private property and shall consist of rock, shell, concrete, asphalt or similar hard surface material and be not less than 9-feet by 20-feet and no more than 50 percent of the front and side yards combined. It also must connect with the public street or alley, permitting ingress and egress of a vehicle.

“Probably one of the easiest code enforcement violations to fix but really upsets residents is parking in the yard,” Groves City Manager D. Sosa said. “Council and city staff will focus on this. There is nothing more demoralizing than parking in your yard and leaving a big mud hole. There is a legal way to park in your yard.”

The code enforcement department was once a shared duty of the city manager, the building official and the fire chief/assistant chief.

“We were pretty good but city council said this (code enforcement) is such an important issue and a way to gain ground and put our best foot forward,” Sosa said. “We took the piecemeal and combined it into one item and hired Adam (Mayea) on Oct. 3.”

Mayea is no stranger to Groves. He worked in a different department for 20 years, grew up in Groves and is a resident. The code enforcement office position is a full-time job and he works closely with the building official, Clint Woods.

Mayea said he is not there just to point out violations but to also offer solutions.

In a 90-day period his office received more than 100 complaints. During the last week-and-a-half there were 23 complaints made by Groves residents for vehicles parked in yards.

The code enforcement officer offered an easy fix to the parking issue. The homeowner can purchase landscape timbers, square them out to the proper proportions and use some sort of stabilizing material such as a piece of rebar.

Before drilling into the ground residents should make sure there are no water, gas, sewer lines. Residents can call the city to check for city lines and 811 for other lines. After stabilization, a resident would then pour the crushed rock, asphalt or other acceptable surface. For specifics on this, call the code enforcement division at 960-5775.

Sosa explained that Mayea is not there just to cite a resident whose child may be visiting from college during break or when family visits at the holidays. 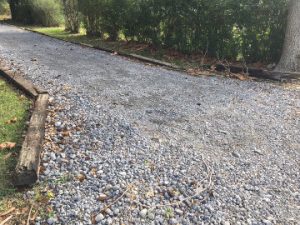 An example of an upgraded surface to park on.
Photo courtesy City of Groves

“This is for the person who parks in their yard 52 weeks a year, 365-days a year,” Sosa said. “This is what would detract from the peace and dignity of the neighborhood.”

Mayea said the city would work with residents on these code violations. While the city can’t help financially, they can offer suggestions on how to fix the issue and give more time to make changes, within reason.

“We understand if it’s been pouring down rain for the past two weeks, you might need and extra week to start,” Mayea said.

The city will soon add a form to its website to allow residents to communicate about code enforcement issues. The form will be able to be submitted via email or fax.

“One of my favorite saying is ‘if you won’t do the easy things you definitely won’t do the hard things.’ Believe it or not, getting the car out of the yard is not a hard thing,” Sosa said. “The yard will look cleaner, more pleasing and add to curb appeal. The main thing is we have someone here to be part of the solution. Groves is a great place to live, work and play.”

See photos you like? Here’s how to order them

Here’s how to order photos that appear in The Port Arthur News. portarthurnews.smugmug.com     read more