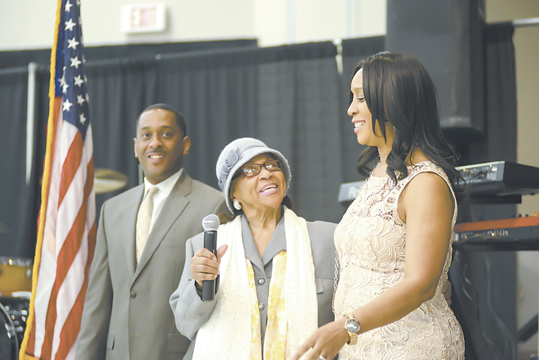 The award is presented to those individuals who display the forethought and vision of Port Arthur’s founder and who generally work towards making the city a better place for its residents and businesses.

Savoy’s association and friendship with Coretta Scott King helped lead her to train at the King Center in Atlanta, GA, where she learned the six principles and steps of non-violence as espoused by Dr. King.

“She went for training at the Atlanta King Center and worked together to found the Dr. Martin Luther King Jr. Support Group of Southeast Texas,” McCoy said.

In exhibiting the traits that the Stilwell Award exemplifies, Savoy seemed to be a likely candidate.

“Arthur (Stilwell) had a dream to build a railroad to the Gulf Coast and to complete the canal for ships and to develop property,” McCoy said. “He built a city.

“And you have to have leaders who will work and develop that city and make it a good place to live. Ms. Savoy is that kind of leader.”

For other people, Savoy appeared to serve a similar role of leadership, as well as that of educator.

“It is important that people step forward and offer leadership,” Norris Batiste said. “Our history teaches us a lot of things, but we didn’t always have people to teach it to us.

“She was one of the people to remind other people of what history was, and how to learn it and how to live it.”

Batiste, a former U.S. Marshal for the Eastern District of Texas, knows Savoy through her community activism. According to Batiste, he has known her for over 40 years.

In discussing some of the qualities that he felt she has instilled in the community, Batiste said, “Pride in yourself; pride in your community; and pride in the things you do to offer your kids, the youth and the next generation.”

Batiste commented on how the popular opinion was to say how bad kids were today as compared to yesteryear; but, he said it was not so.

“Things were difficult back then, too,” Batiste said. “If you didn’t have people who stepped forward and spoke to them, you wouldn’t have the leaders we have today, like doctors and lawyers.

According to Batiste, the quality that stood out most to him in Savoy was her dedication to others.

“She was willing to sacrifice a lot of her life for the betterment of others,” Batiste said.

For former president of Lamar State College-Port Arthur and past Stilwell recipient Dr. Sam Monroe, Savoy’s work within the community has been of exceptional note.

“She’s been a civic leader for a long time,” Monroe said. “I first became acquainted with her in the 1970s; and, she has provided leadership in establishing the Martin Luther King Jr. Support Group.”

Monroe echoed others’ praise of her by recalling Savoy’s hosting of Mrs. King when she was in Port Arthur, as well as helping found the MLK Support Group in SETX with Mrs. King.

“She is just involved in active work and other civil matters, too,” Monroe said. “She’s really been a strong leader for many years; she’s been a community builder.”

In describing the quality that stands out most to him, Monroe cited Savoy’s kindness.

“She’s so friendly and she’s so gracious to everyone she comes in contact with. She’s really a charming person.”

“Ms. Savoy is a great Port Arthur citizen. She’s always been very interested in the well-being of the community,” Hayes said. “She has been a blessing to this city.”

BIC founder to be speaker