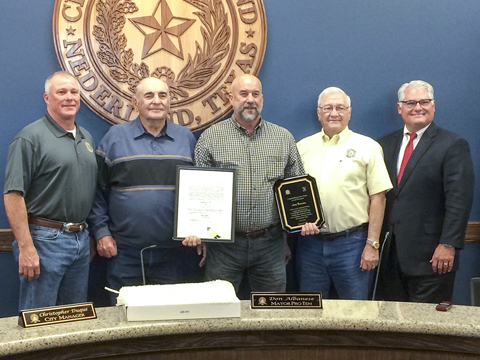 Larry Neumann was honored for his 24-year tenure as Nederland High School’s head football coach and the district’s athletic director.

As part of the ceremony, Jan. 23 was declared Larry Neumann Day in Nederland.

“Just about half of my career has been spent in Nederland. … Thank God for unanswered prayers.”

In other council business, the city’s recycling program will be suspended from Jan. 27 to mid-to-late April as it sees transition from the old location on 27th Street to its new location with new protocols on 515 Hardy Ave.

When the program resumes in April, it will do so with the addition of security cameras and gates.

The thought process is, according to Duque, would that it would be enough to deter people from illegally dumping. If not, there would be cameras to get plates and prosecute the offenders.

“It’s a shame that we have to suspend it because people abuse it,” Talmadge Austin, Ward 1 councilman, said.

The proposed times for the new recycling location would be from Monday to Friday, roughly 7:30 a.m. to 3:30 p.m. There were also talks of a monthly trash drop-off from 8 a.m. to noon on Saturday as supervised by city employees to ensure that it would only be Nederland residents who were using it.

In other news, the council approved an application for a property along Chicago Avenue to join the Neighborhood Empowerment Zone.

Under the NEZ’s auspice, the owner plans to have the old home demolished and two new houses built in its place.

Each house is determined to be a single-family home.