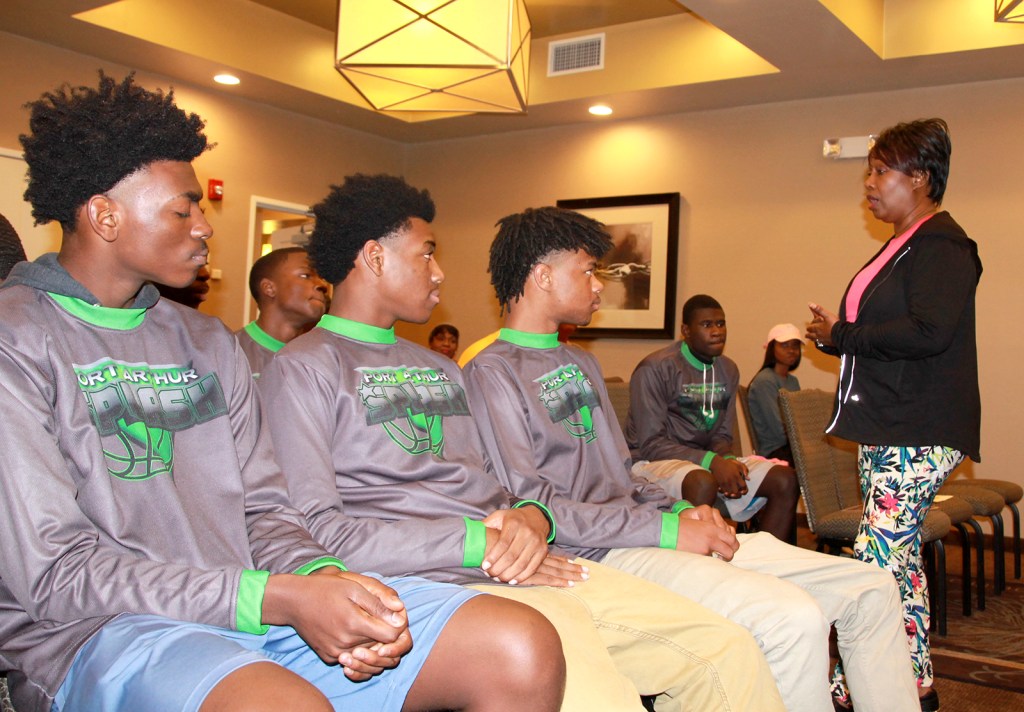 Bringing Back the Glory founder Wanda Bodden speaks to an audience, including members of her Port Arthur Splash basketball team, about this year’s event Saturday in the Holiday Inn Express. (I.C. Murrell/The News)

Wanda Bodden made a big splash onto the local basketball scene last March when she organized the inaugural Bringing Back the Glory basketball tournament at Lincoln Middle School.

The prophetess at Kingdom Culture Fellowship in Groves, who appropriately enough coaches a youth boys team called the Port Arthur Splash, said she was just answering a call from above.

“God gave me a vision,” she said. “I got a lot of phone call from parents saying, ‘Thank you for putting this on.’”

Her mission then was to provide an activity for young basketball players during spring break in a gymnasium that housed eight state championship teams.

Come this spring break, Bodden and her son, Port Arthur Police Det. Ahmaal Bodden, are planning for Bringing Back the Glory and June’s Hit the Floor tournament at the Port Arthur Recreation Center to become international multi-sport events. The Boddens announced their plans Saturday inside the Holiday Inn Express in Port Arthur.

The Boddens visited the Cayman Islands, where Ahmaal’s grandparents are from, last July and met with heads of youth sports organizations there about the possibility of them sending teams to Port Arthur for competition.

“Club teams over there are constantly looking for competition,” Ahmaal Bodden said. “Haiti is talking about sending boxing teams during the week of Bringing Back the Glory, and we have a boxing club here in Port Arthur.”

The plans call for boxing and soccer to be added to the umbrella of Bringing Back the Glory, although no schedules or field of competitors have been finalized. The basketball tournament, however, is set for March 16-17 at Lincoln.

The second annual Hit the Floor is scheduled for Juneteenth weekend, June 17-18.

Ahmaal Bodden said he and his mother have been in contact with representatives from the Caymans, Bermuda, Turks and Caicos and Cuba about bringing teams across all three sports.

“They were very interested,” Ahmaal Bodden said. “Our grandparents are from the Caymans, so it carries a personal meaning to us.”

Port Arthur and the Caymans became “sister cities” in 1983, according to Wanda Bodden, although the Caymans are a British Overseas territory of an estimated 56,000 located south of Cuba.

The basketball event, she said, is expected to draw more teams from Southeast Texas, greater Houston and Louisiana. The event is open to boys and girls teams from 9-under to 17-under age groups.

“Any team that wants to compete and take on some good competition is welcome to come,” he said.

The name Bringing Back the Glory referred to giving kids an understanding of the history and success of Lincoln High basketball, but it may take on a whole new meaning of recapturing the glory of Port Arthur’s sports tradition.

“We want to have this thing go global,” Wanda Bodden said. “Port Arthur is a sports mecca. You’re standing on top of a gold mine.”