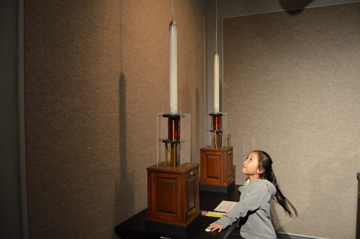 The exhibit Electricity will run until April 29 at Museum of the Gulf Coast in Port Arthur. Visitor Lilly Tran demonstrates how to use one of the hands-on experiments.

Sarah Bellian, curator for the Museum of the Gulf Coast in Port Arthur, said one doesn’t necessarily need to be as reckless as Benjamin Franklin was when he flew a kite with a key tied to the string during a lightning storm to learn about electricity.

The museum, however, started an exhibit on Saturday called Electricity that will run until April 29. The pieces are on loan from the Franklin Institute in Philadelphia that consist of 16 hands-on electrical experiments for children and adults. Another piece for the exhibit is on the way.

There will also be a family fun day for the electricity exhibit from 10 a.m. to 2 p.m. on Saturday, Feb. 4.

Bellian said not only was Franklin a statesman, he was also a scientist who did early experiments with electricity.

“Electricity is one of the fundamental sources that controls the universe,” she said. “Lightning and magnetism are a physical and visible presence of electricity. What is it and how can we control it?”

Bellian’s favorite piece in the exhibit is the plasma tube because light is produced by electrons shooting out of atoms.

“They can physically be seen as light,” she said.

She shares the opinion, furthermore, that the most significant thing the human race has ever accomplished was to harness the power of electricity.

“It’s in our industry and in the way of our everyday life. It’s in our communications, lighting, transportation.”

“The refineries use a mind-boggling amount of electricity. Where would the medical profession be without electricity such as magnetic stirrers? The use of magnets allow us to do so much. Like the magnets that spin the blood in a centrifuge.”

There are also two experiments in the exhibit involving telegraphs. Messages can be sent using Morse Code.

Bellian said that will tie in nicely with a fall exhibit about World War I called No Man’s Land.

World War I was the first time messages were traveling so much faster than past wars that people could know what was happening almost as it happened.

The month of April, likewise, marks the 100th anniversary of America’s entry into World War I.

Another favorite piece for Bellian is Jacob’s Ladder.

Jacob’s Ladder consists of two metal poles that are narrow and run parallel until it reaches the top and spreads apart. Voltage jumps from 110 volts to 15,000 volts.

One can visibly see the electricity travel with an electrical arc. The metal pieces, however, become far apart enough to see the arc stop.

“That’s how a lightning rod works. That’s why you don’t want to carry around a metal pole during a lightning storm,” she said.

Speaking of the Museum of the Gulf Coast in general, Director Tom Neal said in addition to local visitors they also get many international visitors such as from Quebec and London, U.K.

The visitors from London said the museum has so much more than they even could imagine.

Neal believes the MGC in downtown Port Arthur is also one of the safest places to visit in the three county area and crime statistics will demonstrate that.

“It’s so safe here it’s unbelievable. It’s like a park here,” he said. “People are blown away at the depth of things going on here (at the Museum of the Gulf Coast). They tell us it’s the most fantastic place they’ve ever seen.”