Titans have second all to themselves 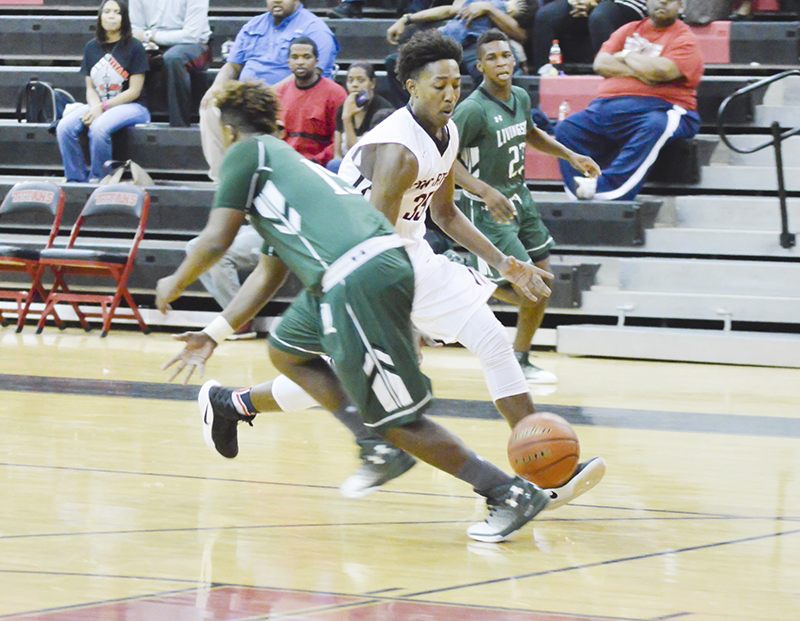 The Port Arthur Memorial Titans now sit alone in second place of District 22-5A after taking down Livingston and Central doing the same against Ozen.

Memorial defeated Livingston 94-42 in Port Arthur on Friday. It made for an easy sweep as the Titans’ JV team won 105-8 and the Titan freshmen came out 100-50 winners.

“We are right where we need to be,” Memorial coach Kenneth Coleman said. “We have to take care of our own business. I like how we competed the first half of district. Everyone has improved and we feel like we have improved also. I like the way we look right now.”

The Titans waited until the second quarter to pull away from the Lions (4-12, 2-5) after leading 18-11. Junior Thailan Wesley had 11 of his 24 points in the game’s first eight minutes.

Memorial then outscored Livingston 33-3 in the second to build a 51-14 advantage at the break.

The Lions’ only points in the second came on a three-pointer from Jae’Vionne Green, who finished with a team-high 17 points with 15 coming on five treys.

“I thought Livingston played hard the entire game,” Coleman said. “They are a very physical team. It wasn’t like we could let up. They make you have to play hard. So we never let up, which is a good thing. The score might have separated it, but I thought it was a good, hard game.”

The Titans played without guard Darion Chatman for the second straight game as he is resting his knees.

Coleman said he never questioned how the team would react without one of its best players.

“It is supposed to be the next man up anyways,” Coleman said. “Our style of play doesn’t cater to one individual, so it is a team effort. I am not surprised the kids were able to step up and continue to with our successes.”

Jyson Butler is one of the players who stepped up. He followed his 21-point effort against Port Neches-Groves on Tuesday with 10 points Friday.

“I think his future is bright,” Coleman said. “I like what we are getting from him. I love his effort, and I think you will continue to see him improve.”

Bishop James and Jacolbe Richard each had eight for the Titans, who are home at 7:30 p.m. Tuesday against Vidor.