THE MOVIE GUY: Shyamalan returns to form with ‘Split’ 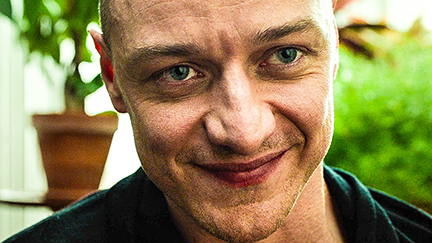 M. Night Shyamalan burst onto the scene in 1999 with his buzz-worthy film, “The Sixth Sense.” He was Hollywood’s reining wonder boy for the next few years, but audiences eventually abandoned him, scoffing at his increasingly desperate need to put a plot twist into all of his films.

His latest film, “Split” also has a twist, but more important, it has an electric acting performance by James McAvoy that makes the film very watchable. I’ll stop short of saying that Shyamalan is back on top of the filmmaking world, but “Split” certainly proves that the he knows how to make very entertaining movies.

The story kicks off with a bang, when a strange man (McAvoy) kidnaps a trio of young women from the mall. When they wake up, the women (Anya Taylor-Joy, Jessica Sula and Haley Lu Richardson) find that they are locked in an underground room. If that’s not scary enough, every time their captor appears, he appears to be a different person.

It turns out that the kidnapper is suffering from dissociative identity disorder, which means that there are 23 distinct personalities living in this one body. These various personalities aren’t exactly at peace with each other, and ominously, they are preparing for the arrival of another personality, known only as “The Beast.”

Credit McAvoy for completely committing to his role as the lunatic kidnapper, and his ability to believably show us so many of the character personas. These characters can be scary or comical, male or female, but no matter which persona shows up, McAvoy keeps the audience enthralled with his fascinating performance.

More credit to Shyamalan for delivering an edge of your seat thrill ride. The kidnapping sequence in particular shows that the filmmaker has a master’s touch when it comes to creating tension-fueled action sequences. I’m also quite impressed by his ability to keep things visually interesting, even though much of the story is locked into the underground room.

It’s not all perfect. Some of the flashback scenes seemed unnecessary and I wasn’t quite sold on the kidnapper’s interactions with his psychiatrist (Betty Buckley), but these are minor quibbles that don’t detract too much from the overall thrust of the movie.

Ultimately, “Split” turns out to be a pretty good return to form for Shyamalan. This is a harrowing little thriller with no pretensions of being high art. Sometimes all you need for an enjoyable night at the movies is a big bucket of popcorn and a filmmaker who knows how to make a B movie thriller into an unapologetically fun, guilty pleasure of a movie.

Kick off your shoes and dance Mardi Gras style