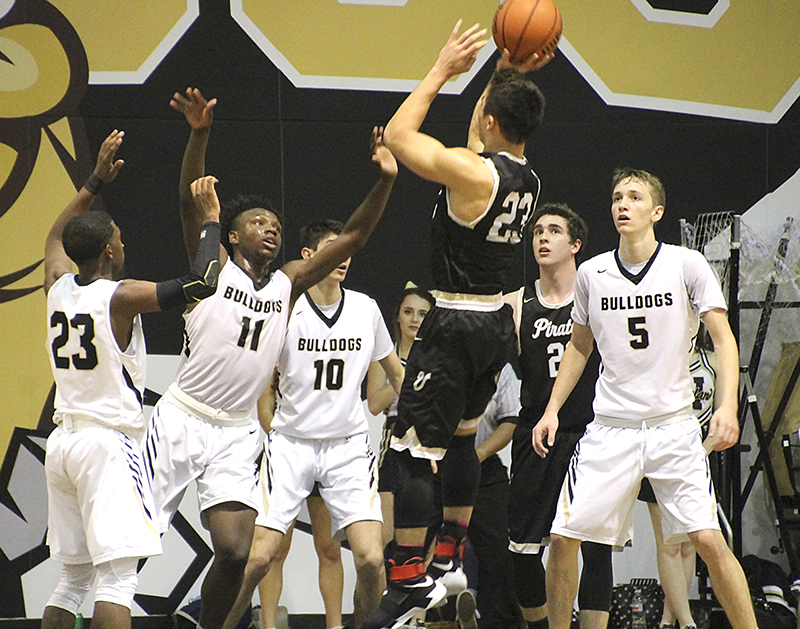 Maverick Quirante of Vidor pulls up for a shot surrounded by the defense of Nederland’s Jonathan Rayford (23), Darrell Jones (11), Cade Smith (10) and Kevin Howard (5) on Friday. (I.C. Murrell/The News)

“At the start of the year, it wasn’t too hot,” Nederland’s 6-foot-3 freshman guard said. “Over the year, it’s gotten better.”

Hefner scored 10 of his 12 points in the fourth quarter, helping Nederland post a 62-42 win over Vidor on Friday night.

The blowout victory, Nederland’s second in a row, was a tune-up for a crucial home game against District 22-5A leader Central on Tuesday.

The Bulldogs (21-7, 4-3 in 22-5A) made things look rather easy for much of the first half. Darrell Jones, who finished with 16 points, keyed a 17-0 run that ran into the second quarter with seven points. Cade Smith nailed back-to-back three-point baskets later in the run.

“We played a great half that first half, both sides of the ball,” Nederland coach Brian English said. “We did some good things well. We got some kids the ball who needed a little confidence. We hope it carries into Tuesday.”

“That’s human nature, sometimes, when you get a big lead,” English said, thinking Nederland suffered a let-up in the period. “You try not to do it, but it happens. Hopefully we can learn from it. We did a good job getting [a big margin] back.”

But Hefner scored eight points in the first 4 minutes of the final period. That helped Nederland increase its lead to 52-31.

Hefner got many of his points slashing to the basket and converting second-chance shots.

“Coach has been telling me to go in a little bit more, and I’ve just been applying it to the game,” Hefner said.

English said Hefner has the ability to play at a high level.

“We’ve just got to get him going, and hopefully tonight will boost his confidence more,” English said.

Vidor will visit Port Arthur Memorial on Tuesday. Memorial remains second in district standings, one game behind Central, with Ozen one game ahead of Nederland for third.