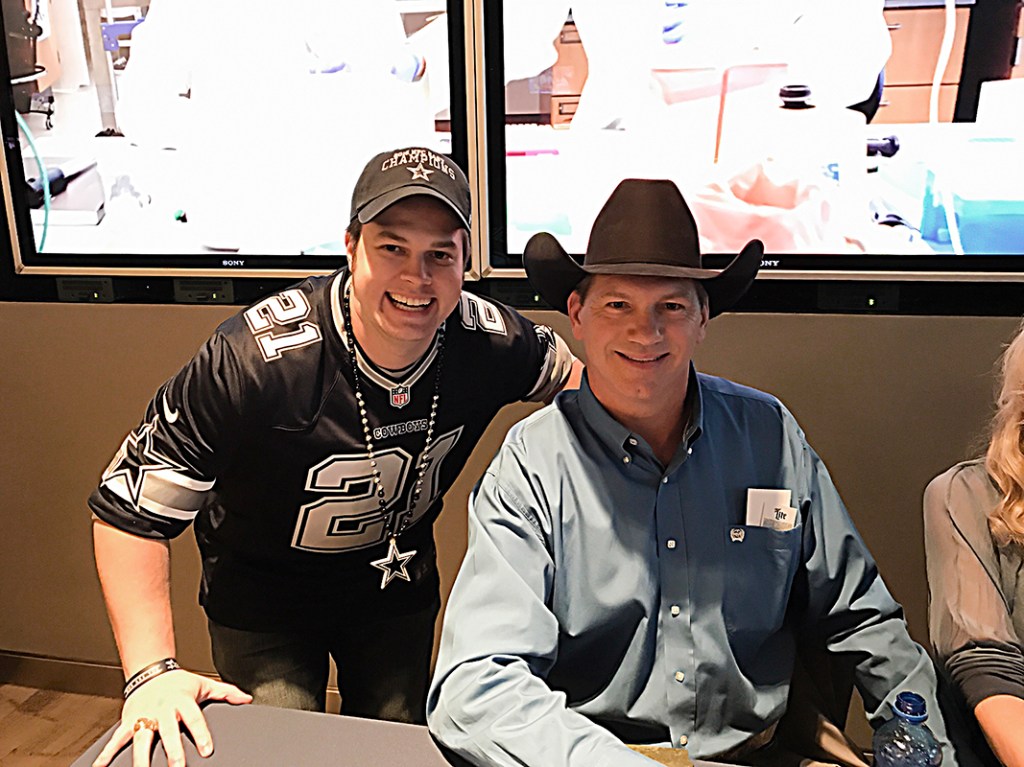 Port Neches resident Mac Cannon figured when the Green Bay Packers and Dallas Cowboys finished playing last Sunday he would have one more drink to ease the pain of the Cowboys’ loss and then hit the road.

A tornado warning after the Packers’ 34-31 victory in the NFC divisional playoff meant some fans, the entire Packers group and several Cowboys players inside AT&T STadium were stuck for more than 2 extra hours.

“We were at the bar having a drink after the game ended, you can imagine why,” Cannon, a lifelong Cowboys fan, said in reference to his team’s loss. “They have televisions and monitors all around the concourse and suite level. As we were having a drink, we heard the weather announcement warning system in the stadium sound.”

Cannon said it was around that time cell phones started to go off with alerts and the monitors all had the message “Severe weather. Please take shelter.”

Part of the problem for people inside the stadium was the fact they had no clue exactly where the storms were and even how bad it really was.

“It was pretty scared,” Cannon said. “We didn’t know there were tornadoes touching down until we were walking through the stadium to seek shelter. They had security spaced out about every 500 feet warning people to stay clear of windows and doors and were not allowing anyone to leave. They informed us there were high winds of up to 65 mph and confirmed reports of tornadoes actually touching down about 35 minutes away from the stadium.  Just knowing a tornado touched down about 30 minutes away was pretty scary.”

So Cannon and his group did what a majority of football fans did after the Cowboys game. They watched the Pittsburgh vs. Kansas City playoff game.

Except Cannon and the people inside AT&T Stadium watched it on the 160-foot wide and 72-foot tall video board.

“They had crews taking down the goal posts, and that was pretty interesting to see them doing that,” he said. “Dak [Prescott], Zeke [Ezekiel Elliott], [Travis] Frederick and some coaching personnel got stuck in the stadium and were on the field.  We began to chant ‘Dak’ and ‘Zeke’ and they waved at the fans that were stuck in the stadium.”

It is obvious Cannon had tons of texts and phone calls pouring in while he was stuck inside the stadium.

“My phone ended up dying not long after I began to receive texts and calls,” he added. “My family and close friends knew I was with my brother-in-law, so I was able to use his phone to let them know I was safe.”

The people left inside the stadium were able to leave just before 10 p.m.

Cannon’s night was not over as he had to drive to where he was staying in Dallas, about 25 minutes away.

“The wind was blowing and it was pouring down,” he said. “The parking lots and roads were filled with water. By the time we got back to the car we were drenched.

We had to take alternate routes because many of the roads were flooded and blocked off. What should have taken about 25 minutes ended up taking about an hour to get back.”

No matter the weather and storms, Cannon still had one message about his Cowboys even after the loss to the Packers.