Half a world away: Serbian stands tall at LSCPA 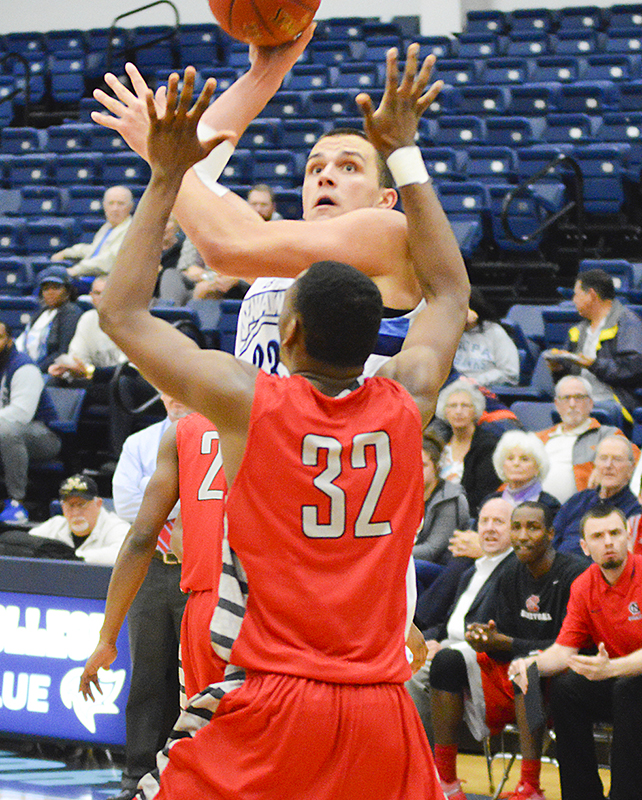 Petar Radojicic is a long way from home.

It is actually about 5,800 miles away to his native Serbia.

Though that is a ways away, Radojicic has certainly found a home at Lamar State College Port Arthur.

He is a 6-foot-9 sophomore post for the Seahawks and he is having the best year of a career that has spanned three seasons.

Radojicic took a medical redshirt last year after a back injury forced him to have a surgery.

He had to sit and watch the Seahawks win the Region XIV South Zone regular season championship. The team went on to advance to the conference tournament semifinals.

LSCPA coach Lance Madison knows it was hard on Radojicic to not be able to be on the court.

“He definitely would have been a contributor on last year’s team,” Madison said. “I know it was hard on him to watch but sometimes when you do sit and watch you are able to get better as a player and learn. I think sitting out he has been able to become a better player by learning from other people’s mistakes. He matured as a person and a basketball player.”

Radojicic is averaging 14.4 points and 10.2 rebounds a game this year. He is 10th in the nation in field goal percentage at 64.5 percent among players with at least 100 attempted shots.

“To be honest, I didn’t see myself averaging a double-double this long into the season,” he said. “I worked hard over the summer and in the preseason. I feel good on the court right now.”

Radojicic felt really good this past summer when he had the chance to travel home to Serbia to visit family and friends.

“It can be tough being so far from home,” Radojicic said. “I have gotten used to it. The holidays, though, are the toughest. I will always think about my family and spending time with them. My teammates get to go home during the holidays and I can’t go back home.

“I went back this past summer and it was great. It was great to see my family and my friends. I got to hang out and go on vacation.”

Radojicic last year had the company of Marko Zelic, who was also from Serbia and was a sophomore last season.

Madison said being away from home has helped Radojicic mature and become stronger as a person.

“He comes from a country where he has seen a lot,” Madison said. “He is appreciative to come here and get an education. He does well in the classroom and he wants to be successful on and off the court. He never wants to let his teammates, coaches and family down.”

So how does a teenager in Serbia end up in Port Arthur? It is a lot simpler than one might think.

“That is a question everyone asks me,” Radojicic said. “I had a Serbian coach that also coached at North Texas and he recommended me. I sent some game film to Coach Madison and one day I woke up and I had an offer to Lamar State College Port Arthur.

“I had to go to Google Maps to look up Port Arthur, Texas. I really like this area.”

And through it all, LSCPA basketball fans really like having Radojicic on the team.