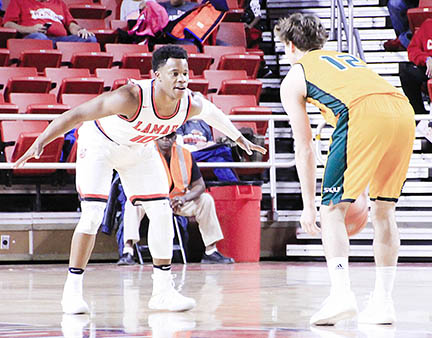 Lamar junior Torey Noel guards the ball earlier this season against Southeastern Louisiana. The Cardinals are on the road tonight to face Sam Houston State in Huntsville at 6:30 p.m. (I.C. Murrell/The News)

• Trends: The Cardinals are 1-1 on games played on Thursdays this year and 3-6 on the road…LU is 11-0 when leading with five minutes left and 0-6 when trailing with the same time left on the clock…Nederland graduate Colton Weisbrod has led the Cardinals in scoring in 10 of Lamar’s 18 games. His eight double-doubles leads the SLC.

Lamar sports information
BEAUMONT – The Lamar men’s basketball team heads to Huntsville in an unfortunately familiar situation and that is looking to bounce back from a game which it let slip away. The positive from this, the last time the Cardinals (11-7/3-2 Southland) were in this scenario, an overtime loss to New Orleans, LU turned it into a positive. The Cards rebounded two nights later with a 20-point thumping of Southeastern Louisiana.

The heartbreak this time came at Abilene Christian, a contest that saw LU lead by as many as 15 points in the second half. For the first time all season, the Cardinals struggled from three-point range and the Wildcats took advantage chipping away at the deficit. Trailing by three, ACU got the ball back with 31 seconds remaining and hit a triple to tie the game. The Cardinals turned the ball over on its next possession and the Wildcats responded by sinking a prayer from just beyond the half court line as time expired.

For the Cardinals to get a bounce-back performance this time around, it will have to come against the preseason favorite Sam Houston State Bearkats on their home floor. Despite being picked to win the league, the Bearkats have hit a few bumps in the road. After winning five straight, the Bearkats dropped their non-conference finale at Arkansas followed by the first two league games. SHSU has since rattled off four consecutive but three of the four wins have been by nine points or less.

The Bearkats strength relies in its overall depth. While SHSU was led by 23 points from Paul Baxter in its victory at Northwestern State, no Sam Houston player currently ranks in the league’s top 25 in scoring and only one player is ranked among the league’s top 10 in rebounds.

If there is a chink in the Bearkats’ armor, it would be with the three-point shot. SHSU has struggled to knock down its three-pointers entering the week ranked 13th in the league shooting just 92 percent. The ‘Kats have struggled at times to defend the three as well. Sam Houston is currently eighth in the league surrendering nearly 35 percent to its opponents.

The Cardinals continue to lead the Southland averaging just a shade under 80 points per game (79.9 ppg). LU also ranks among the league leaders in scoring defense as well (70.2 ppg). The catalyst for the Cardinals’ offense has been junior Colton Weisbrod. The reigning Southland Player of the
Week, Weisbrod is averaging 16.5 points per game and leads the Southland pulling down better than nine rebounds per contest.

As hard as it is to imagine, the league’s leader in double-doubles has taken his production to another level in the last three games. During that stretch he has scored at least 21 points in every game and is averaging 27 points per outing.

The Cardinals will be looking for a return to form by sophomore Nick Garth. The Houston native is second on the team averaging better than 11 points per game, and is one of the league’s top three-point shooters but was a non-factor against Abilene Christian. Garth attempted only two shots against ACU, and just one from beyond the arc.

The Cardinals come into the Thursday night contest looking to reverse a recent trend in the series. The Cardinals are currently five games under .500 (29-34) all-time against the ‘Kats and have not defeated SHSU since the 2011-12 season (eight-straight games).

The game is set to tip off at 6:30 p.m. from the Bernard G. Johnson Coliseum in Huntsville. It can be heard live on Newstalk 560 KLVI.

The Texas Department of Public Safety is responding to a multiple vehicle crash on Interstate 10, near Vidor, in Orange... read more