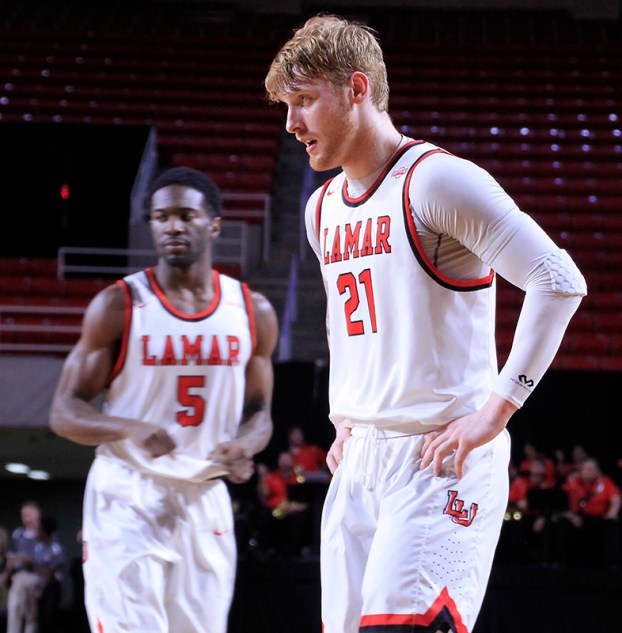 It is the first time in his career that Weisbrod has received the honor, and the second time this season that a Cardinal has earned the award (Joey Frenchwood).

The Cardinals finished the week 1-1 in Southland Conference play knocking off Incarnate Word, 87-72, but dropped a heartbreaking three-point decision at Abilene Christian Saturday that saw the Wildcats hit a half-court shot at the buzzer to win the game.

The Nederland native has been on a tear lately, averaging 27 points per game – including a career-high 34 points – over the course of the past three games. Weisbrod averaged 23.5 points and 11.5 rebounds in the two games last week. He also dished out two assists and recorded a steal. He shot nearly 50 percent from the field, and was a near perfect 15 of 19 from the free throw line during the two games.

He scored 26 points and pulled down 13 rebounds as the Cardinals pulled away late from Incarnate Word. Weisbrod followed that up with a 21-point, 10-rebound effort at Abilene Christian, where four of his 10 boards came on the offensive end of the floor.

Winners in six of their last eight games, the Cardinals return to action Thursday when they travel to Huntsville to take on preseason favorite Sam Houston State. The game against the Bearkats is slated to tip off at 6:30 p.m. from the Montagne Center.

The Cardinals enter the game looking to break free from a three-way tie for third in the Southland standings. Big Red enters the week tied with Stephen F. Austin and Central Arkansas, and just a game back of Southeastern Louisiana and Sam Houston State in the win column.

PNG SOFTBALL REGISTRATION ONGOING Registration for the PNG Softball League is open. Sign-ups will be held at the purple concession... read more