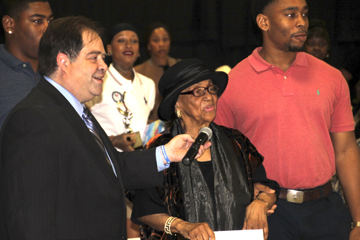 Hargie Faye Savoy, president and founder of the Martin Luther King Jr. Support Group of Southeast Texas, speaks to the crowd of about 1,200 in the Bob Bowers Civic Center on Monday as emcee Angel San Juan holds the microphone for her. Standing behind Savoy, holding a trophy, is high jumper Inika McPherson, one of the honorees during the Martin Luther King Jr. Brunch. (I.C. Murrell/The News)

Jones made the comments during his keynote speech at the 31st anniversary of the 2017 Martin Luther King Jr. National Holiday Celebration Brunch on Monday morning at the Bob Bowers Civic Center in Port Arthur. He said MLK was a preacher, activist and martyr.

MLK used the term drum major in a speech on Feb. 4, 1968 about James and John, the son of Zebedee, who asked Jesus if they may sit, one on the right hand, and the other on the left hand, in glory.

Jones said their request was selfish and not from a real drum major, but a true drum major knows greatness is from servitude and a life first in love.

For instance, Jesus instructed His followers to feed the hungry, clothed the naked, and give the thirsty drink.

“A drum major stands for justice, peace and righteousness,” he said. “He puts service before self and gives a voice for the voiceless. He gives his time, talent and treasure to the least of these.”

Jones said there is a dire need for drum majors in the nation’s uncertain time.

“Where are the drum majors? Are you ready? We need to show an attitude of gratitude. Though there are some bad things we still have a lot to celebrate,” he said.

He cited as examples the brave men and women who serve the country in uniform and President Barack Obama for his policies and his family life.

Jones added King understood adversity is something that can be celebrated to see who’s ready to be a drum major.

Jones then gave a brief timeline of race relations and the history of the civil rights movement in the United States.

“We must act,” he said. “We need to turn down fixtures that prevent us from working together and find common ground.”

“We need to turn down every fence restricting us from working with our brothers and sisters.”

Jones said this is agape love — A Greek word for love that is spiritual and selfless in nature, according to WordNet Dictionary.

The last point he spoke on was having faith.

He said MLK never wanted to be a national civil rights leader. He wanted to have a nice church in the south as his father had.

“He was a reluctant prophet,” he said.

Jones gave an account of MLK during the transit workers strike in Birmingham, Ala. in 1956. He said MLK got a phone call threatening his life if he didn’t leave the city. MLK became worried and thought about leaving the movement.

It was then he heard a voice tell him to stand up for justice and his fears went away.

The last point of Jones’ speech was to have faith in young people.

He said MLK developed young leaders around him in the civil rights movement.

“Who are you developing?” Jones asked. “We need to step up.”

He then gave a list of people in the movement who stepped up over the nation’s history.

Earlier during the brunch, Hargie Faye Savoy, president of the Martin Luther King Jr. Support Group of Southeast Texas said though these are serious times, they need to continue living happy lives.

“We need to continue to be the people we are,” she said. “All is not well.”

“We need to trust God and keep the holiday alive and keep following the guiding principles of Dr. King.”

King said her inspiration was her mother.

“My mother always taught me to give back to the community,” she said.

King is a member of New St. John’s Baptist Church and she said this award is a group effort.

“This is shared with the other ladies,” she said.

Detective Michael Hebert with the Port Arthur Police Department was given the Spirit Award.

He has been with the PAPD since 1989. He started the Blue Santa program for children in need and they also assist special needs children.

Twice he was officer of the year for PAPD, he received a lifesaving award and an award from Texas Commission on Law Enforcement. The city of Port Arthur issued two proclamations to him for his work with youth.

Hebert said the first day on the job he posted three photographs — President John F. Kennedy, a Chinese student standing in front of a column of tanks in Tiananmen Square and MLK.

Port Arthur Olympian Inika McPherson was honored with a tribute for participating in the 2016 Olympics in Brazil.

Zena Stephens, Jefferson County sheriff, was also honored with a tribute. She was elected as the only African-American female sheriff in Texas in November.

“When I ran, I wanted to make a difference.”

She said she had two hard-working parents growing up and they would discipline her when she didn’t do the things she supposed to do.

“We need to make people accountable for not doing the right thing,” she said. “While I’m here, I intend for it to matter.”

PAPD positions updating up for a approval

There will be no reduction in force, but there may be a change in the number of authorized police officer... read more