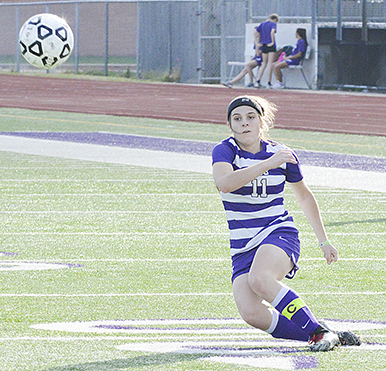 Port Neches-Groves senior Hailey Loupe fires a shot into the back of the net from 20 yards out Thursday during the Indians’ 3-0 win over Pasadena Dobie. (Gabriel Pruett/The News)

Loupe had a total of three goals as PNG defeated Pasadena Dobie 3-0 before blanking Victoria West 1-0. She had two goals in the first half against Dobie.

Sophia Brant nailed a penaly kick in the second half of that match to finish the scoring.

Junior keeper Libbie LeJeune had nine saves on day in the two shutouts.

PNG faces Sam Rayburn at 2:40 p.m. today and then gets its biggest challenge of the young season at 6 p.m. when the team faces Class 4A No. 8 Hardin-Jefferson.

NEDERLAND 8, HOUSTON SFA 0
KATY — The Nederland Bulldogs wasted no time introducing themselves at the Katy I10 Shootout.

Madison Ledet and Haley Dugas both had a goal.

Nederland at 2 p.m. today faces the winner between Mayde Creek and Klein Forrest.

At some point, someone from outside of Alabama gets tired of crimson. Nothing is attractive about a plain red jersey... read more