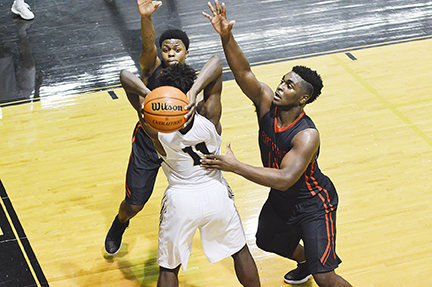 Titans pick up intensity, rally in 4th to beat Bulldogs

NEDERLAND — Port Arthur Memorial might press a lot on defense but with five minutes and after a timeout, the Titans’ defense kicked it up to a completely different level.

The defensive intensity led to a 53-46 win over the Nederland Bulldogs in the Dog Dome.

Memorial is now 16-5 overall and 4-1 in District 22-5A. The Titans went 2-1 versus the top teams in the district over the last four games. Central beat Memorial before the Titans have rattled off three straight victories, including a 68-67 win over Ozen on Tuesday.

Nederland has a 19-7 record and is 2-3 in 22-5A. The Bulldogs went 0-3 against the top teams in the district.
The Titans used a timeout at 5:14 to calm down once Darrell Jones got hot for the Bulldogs. He at one point had six of the last eight points for Nederland who took a 39-37 lead.

Memorial’s intensity went up about three levels from that point on, and it cause two quick turnovers and helped the Titans grab a 44-40 lead, a lead the visitors would not surrender.

“That is our philosophy,” Darion Chatman said. “We know our defense is going to win us games. To win a big game like this because of our defense is a good feeling. Coach (Kenneth) Coleman told us we had to give it our all during that timeout. We played the same five guys the entire fourth quarter. That takes some guts. We had to dig through being tired.”

Nederland’s Cade Smith hit a three-pointer for the Bulldogs with 38 seconds left to cut into the Titans’ lead and to make it 50-46.

Reao Keller later hit one free throw for Memorial to push the lead up to 51-46 with 19 seconds left and it led to the biggest defensive play of the game for the titans.

Chatman intercepted a pass and then knocked two a pair of free throws to seal the victory.

“I’ll take it,” Coleman said of going 2-1 against Ozen, Central and Nederland. “It’s huge. I knew when we dropped from 6A to 5A we were actually going to a harder district. We welcome it. It is exciting basketball and it is always a playoff atmosphere each night.”

The Titans put two players in double digits with Thailan Wesley leading the way with 18 points. Chatman added 15. Bishop James, Nathan Clover and Jamard Valsin each had six points.
Nederland also had two in double figures as Kevin Howard finished with 13 and Darrell Jones put in 12.

The Titans did a splendid job on defense in the first half against Jones. Jones had four points at the break before picking up his game in the third with six points.

Howard started off real big with 10 points in the game’s first eight minutes.

Nederland outscored Memorial 15-7 in the third and was able to grab a 39-37 lead heading into the fourth. The Titans then outscored the Bulldogs 17-7 in the final frame.

Memorial gets back on the court Tuesday at Port Neches-Groves while Nederland travels to face Livingston. Both games are slated for 7:30 p.m. starts.
•
Gabriel Pruett: 721-2436. Twitter: @PaNewsGabe

BEAUMONT — The Lamar Cardinals did not have time to celebrate and worry about being on a 10-game winning streak... read more