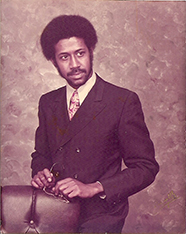 Mr. Arthur H. Calton, Sr. passed away on the morning of Tuesday, January 3, 2017 in Missouri City, TX after being ill for many years. Born Sunday, July 4, 1943 and raised in Fort Worth, TX, he was a loving husband, father, grandfather, and brother.

Arthur began his life supported by both his parents as well as his grandparents, Henry and Parlee Rand. He did his higher learning at I. M. Terrell High School, Morehouse College, and the University of North Texas (UNT). He began his career as a chemist at the Miller Brewery in Fort Worth, followed by Alcon, and he was finally hired by Ortho Clinical Diagnostics, a subsidiary of Johnson & Johnson, in 1973.

After being relocated to New Jersey in 1981 by Ortho, where he worked until his disability in 1990, he and his wife moved back home to Texas in 2000. He was a diligent and dedicated employee who loved his work and always said he never wanted to retire.

He loved all types of music. He was an avid fan of jazz, having been a student of clarinet and saxophone. He developed close friendships at UNT, where he met lifelong jazz musician friends Lester Bowie, Tex Allen, and Billy Harper. Billy is still active to this day, living, teaching, and performing in New York City and traveling around the world.

Arthur deeply loved and cared for his family, going to massive lengths to ensure they had everything they needed and most of what they wanted. He had a sharp wit and a unique sense of humor, an interest in science fiction, and an intelligently formed philosophy and understanding of the world around him.

The family would like to thank the staffs of Oyster Creek Manor Senior Living facility and Hospice Plus for their care and attention during the past 15 months. The family would also like to thank family and friends for the endless hours of care and attention they gave not only to Arthur, Sr. but also to his wife Angela who dedicated the final 26 years of their 37 years of marriage to managing the household and caring for her husband.

His funeral service will be held at 11 AM on Friday, January 13, 2017 at Gabriel Funeral Home in Port Arthur, TX with the visitation beginning at 9 AM. Burial will follow at Greenlawn Memorial Park. In lieu of flowers, please consider a donation to the Fisher Center for Alzheimer’s Research Foundation: https://www.alzinfo.org/donate.