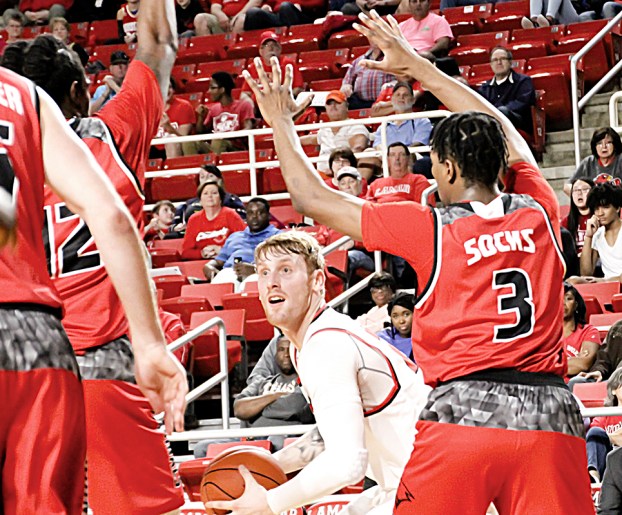 Colton Weisbrod of Lamar, from Nederland, fakes a shot as he draws the double team from Miles Banks (12) and SImi Socks (3) of UIW on Wednesday. (I.C. Murrell/The News)

And for an encore … Weisbrod nets 26, Frenchwood 21 in win 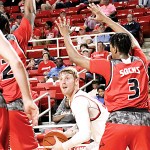 Colton Weisbrod of Lamar, from Nederland, fakes a shot as he draws the double team from Miles Banks (12) and SImi Socks (3) of UIW on Wednesday. (I.C. Murrell/The News) 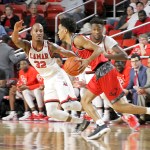 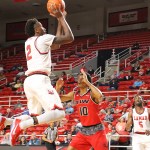 Dorian Chatman of Lamar, from Port Arthur, pulls up a shot against Tyler Singleton of Lamar on Wednesday. (I.C. Murrell/The News)

BEAUMONT — Four days passed since Colton Weisbrod scored 34 points on Southeastern Louisiana, and the Lamar junior from Nederland has not cooled off.

Weisbrod followed his LU career high with 26 points Wednesday, as Lamar won its second straight game, 87-72 over Incarnate Word in the battle of the Cardinals.

“I think we’re just starting to jell,” Weisbrod said. “People are understanding their roles, and we’re a difficult team to guard. We have specialists all over the floor.”

Weisbrod registered his seventh double-double of the season by adding 13 rebounds. He shot 9 for 20 from the floor and was 8 for 10 in free throws.

“It’s easy when you have [Weisbrod] commanding all this attention. They have to double up on him, or he’s going to have 50 [points],” Frenchwood said.

Weisbrod, a 69 percent foul shooter going into Wednesday, has made 22 of 28 in the past three games. Lamar went 22 for 26 Wednesday.

Lamar (11-6, 3-1 Southland) improved to 8-1 at the Montagne Center and closed out a three-game homestand. Jefferson County’s Cardinals will sojourn for the next three games from Abilene to Thibodaux, La., with a visit to Southland Conference favorite Sam Houston State in between.

Lamar shot 41.2 percent (7 of 17) from three-point range. Frenchwood made 4 of 6 from the arc and threw in three assists and four steals.

“I hadn’t been shooting it as well as I want to this year, so I kind of felt like I was letting the team down,” said Frenchwood, the junior transfer who was hitting 40.3 percent from the floor and 30.4 from the arc before Wednesday. “I added a couple more reps and a couple hundred more shots a day than I normally do to help us get back on track.”

Weisbrod, ever the team spokesman, followed up Frenchwood’s thoughts.

“I’ll tell you what he was doing,” he said. “He’s been in the gym shooting while we’re eating a team meal, after we got done with walk-throughs. He’s in there getting extra shots up for 20 minutes. Things like that carry over.”

PACE OF THE GAME

Lamar never trailed and was tied only twice, 2-2 and 4-4. Frenchwood had five points in the first 2 minutes as the home Cardinals extended their lead, and UIW (6-10, 1-4) never got within any closer than 16-13.

Weisbrod, who had the other nine of Lamar’s first 14 points, totaled 13 points at the break as Lamar shot 53.1 percent from the floor. The home Cards finished 47.5 percent to the visiting Cards’ 42.4 percent.

The Cardinals were up by as much as 63-45 following a Nick Garth trey, but UIW climbed back to within 67-61 before UIW guard Simi Socks ignited a 16-4 run with back-to-back buckets.

Tyler Singleton led UIW with 17 points, and Shawn Johnson hung up 16. Socks had 14 points before fouling out with 8:50 left.

Price, on guard Zjori Bosha blocking three shots: “The guy can’t jump over a roll of toilet paper, but he has great anticipation.” Bosha also had seven points.

The Cardinals will play at Abilene Christian (7-8, 1-3) at 4 p.m. Saturday. The Wildcats are coming off a 69-60 home win over Stephen F. Austin and will host Southeastern Louisiana at 7 tonight.