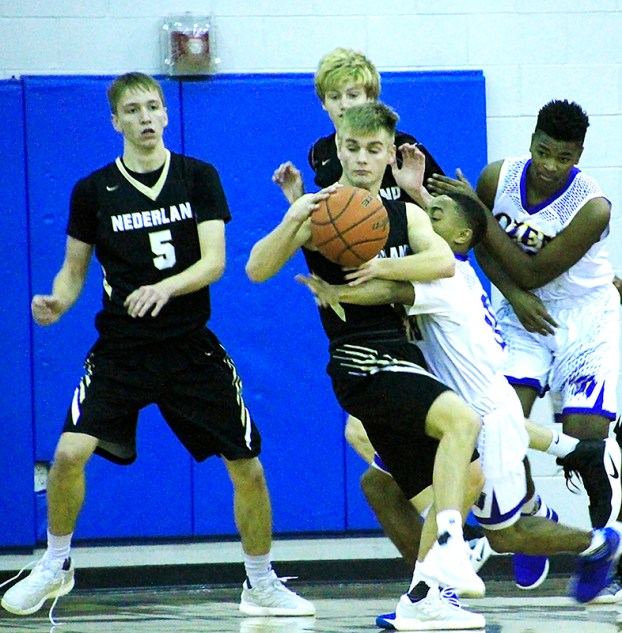 Reid Garrett of Nederland, with ball, and Tyler Broussard of Ozen battle for a loose ball in the first quarter Friday night in Beaumont. (I.C. Murrell/The News)

BEAUMONT — The more Ozen missed a bonus shot, the longer Nederland stayed in the game.

Ozen went 0 for 3 from the free-throw line in the final 10.2 seconds, but Nederland came up empty on two late possessions to suffer a 60-57 loss on the road Friday night.

“We needed to make a few more plays, but I thought we played pretty good,” said Nederland coach Brian English, his team now 18-6 and 1-2 in District 22-5A. “They just played a little bit better. They made a few more plays at the end. Credit to them.”

The Bulldogs made a game of it in the final 1:29 after trailing 58-49. Darrell Jones, who finished with 22 points, hit two field goals and two free throws to pull them within 58-55, but Tyler Broussard made free throws with 18 seconds remaining to up the lead to 60-55.  Broussard had 20 points after being held scoreless in the first 8 minutes.

Nederland’s first chance to tie late came after Kevin Howard drove for a two-hand dunk. A 1-and-1 shot was no good for Ozen (13-5, 3-0), leaving the door open for the Bulldogs, but Broussard stole a cross-court pass and was fouled with 3 seconds to go. But he missed two free throws, and Jones attempted a half-court shot that drew the rim at the buzzer.

Nederland has not beaten a Beaumont ISD team in 10 tries since Jan. 14, 2014, when it won at Central. The previous meeting with Ozen ended in a 79-76 overtime win for the Panthers at the Dog Dome last Jan. 29.

“There’s a lot of inexperience on this group, so I’m not too sure they’re, right now at this point, believing they can beat this team,” English said.

While Ozen came up with big runs, it seemed Nederland would pull off the big win over the No. 17-ranked team in 5A by the Texas Association of Basketball Coaches.

The Bulldogs led by as much as 9-2 before Ozen ended the first period ahead 17-15. Cade Smith knocked down a pair of three-point shots to put Nederland up 25-22, but the Panthers’ defense silenced the Bulldogs from the floor for a 4-minute stretch. Ozen capitalized with a 9-0 spurt and led 31-26 at halftime.

Nederland extended its zone defense to force Ozen to attack the basket, and while Broussard and Derrian Jones combined for 11 of the Panthers’ 15 third-quarter points, Reid Garrett warmed up from the outside with three of his four three-point shots. Garrett, who finished with 16 points, drained his last trey at the 2:03 mark of the period to give Nederland its last lead at 41-40.

Still, Ozen’s guards found success scoring off the dribble to pull away.

“Their quickness hurts us tonight,” English said. “That’s something we’ve got to do a better job on, staying in front.”

Nederland must now look forward to its own rivalry week, when it hosts Port Neches-Groves on Tuesday and Port Arthur Memorial next Friday. Ozen visits Memorial on Tuesday.

The News staff reports HUMBLE — The Nederland girls’ soccer team is off to a 1-0-1 start to the season... read more