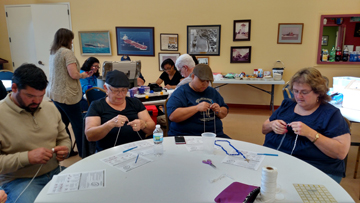 There will be a class on how to make handmade rosaries for this upcoming Mardi Gras from 2 to 5 p.m. on Sunday, Jan. 8 at the Port Arthur International Seafarers' Center, 401 Houston Ave.

TLC go into these rosaries

Some of the rosaries at this year Mardi Gras of Southeast Texas may be a little extra special.

That’s because some of the rosaries will be handmade and prayed over for the person who is to receive them. Doreen Badeaux, with the Apostleship of the Sea, said they give out a few thousand rosaries during Mardi Gras. It was decided to make the rosaries so there will be more to give out and they could be a gift of love to attendees by giving a homemade item to total strangers.

“We’ve had the Encounter Catholic booth the past few years at Mardi Gras,” she said. “Father Sinclair (Oubre) once attended another event next to a huge Catholic church. The doors were closed and it was not very welcoming. It was an opportunity for us with events here.”

“We want to be a part of the community and be welcoming. We want to bring back Catholic ideas that goes with Mardi Gras.”

Other freebies given at the Encounter Catholic booths in addition to the rosaries are pamphlets that dispel myths about the Catholic Church, free photographs taken in which the picture frame can be decorated and how to find a nearby Catholic church.

Badeaux said some rosaries were made last January and the organizers will have a better idea they year how to make them.

“We’ve had a nice response from people. They’re really excited,” she said.

Some of the rosaries are decorated in the Mardi Gras colors or in red, white and blue that are particularly popular with military personnel.

“We hope to make a few hundred,” Badeaux said. “We can arrange so people can bring supplies home and make some more.”

“Some can make them in 15 to 20 minutes. It usually takes an hour to make one the first time. It doesn’t take a lot of equipment and it keeps your hands busy. We then say a prayer for the person using them.”

Those interested in making some rosary beads for this Mardi Gras may meet from 2 to 5 p.m. on Sunday, Jan. 8 at the Port Arthur International Seafarers’ Center, 401 Houston Ave. in Port Arthur.

The 2017 Mardi Gras Southeast Texas unofficially kicks off this weekend with Beans & Jeans. The party runs from 6... read more