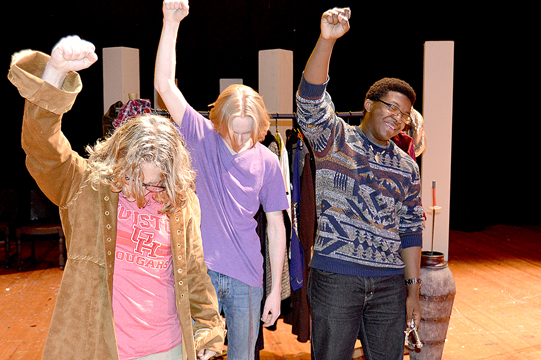 Ty Riddell, Cace Dale and William Ntsoane rehearse their roles for “The Complete Works of William Shakespeare, Abridged/Revised/Edited” at PNG High School. The actors rap in one of their scenes. (Lorenzo Salinas/The News)

Come for the drama, stay for the humor — a creative mishmash of Shakespeare’s works is coming to Groves.

The PNG Theatre Department will present “The Complete Works of William Shakespeare, Abridged/Revised/Edited” at 7 p.m. on Jan. 6 at The Courtyard in Groves.

The stage play was written by three individuals who parody the works of Shakespeare and run through his thirty-seven plays as performed by three actors — or, in this rendition, by PNG seniors Ty Riddell, Cace Dale and William Ntsoane.

“We did part of it in the thespian show in Dallas,” Riddell said. “This is our first time doing the full thing.”

“We’ve wanted to do the show for a long time,” Ntsoane said. 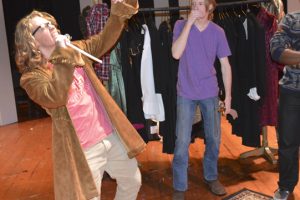 Readers may note the “Abridged/Revised/Edited” portion of the title and may wonder what was changed.

“There’s a lot of comedy in it,” Dale said, speaking of some of the bawdier elements found in both the modern adaption and in Shakespeare. “Because it’s a school play, we had to cut it down.”

For example, the high school thespians described a scene where a monogram took on a lewd connotation that had to be edited out for the local performance.

“There’s some really raunchy stuff in there,” Ntsoane said. 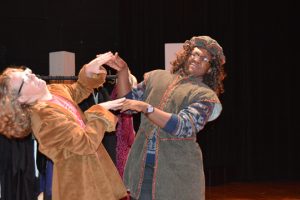 Ty Riddell and William Ntsoane have a slap fight in character for “The Complete Works of William Shakespeare, Abridged/Revised/Edited.” (Lorenzo Salinas/The News)

“There’s some breaking of the fourth wall,” Ntsoane said. “There are some audience interactions.”

In describing their favorite character roles: Riddell named Macduff, a rival to Macbeth who “wreaks vengeance” on the eponymous character; Dale named Macbeth because of the Scottish accent and play on words; and Ntsoane named Romeo, Julius Caesar and Othello because they are all fun to play.

Music lovers could also look forward to some parts of the performance being conducted in rap, very much in a Run DMC vibe, according to Riddell.

“It’s based on a book. Three guys wrote this show and the audience can follow as it goes along with it,” Riddell said.

“It might look like we’re improv-ing lines, but then people will think there’s no way they can improv this much.” 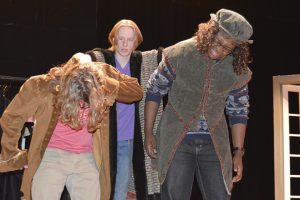 All three actors professed love for the theatre convention at the Texas Thespian State Festival, where thespians from schools and colleges gather to perform shows and to meet up — and where they first performed a sample of their Shakespeare work.

In discussing the power of the original work by Shakespeare, Riddell said, “Great literature transcends time and space … They’re human stories. We still suffer from the same problems we have ever since civilization began.”

As for their plans after high school, Riddell plans on attending the University of Houston and studying Arabic and Mandarin Chinese for multicultural languages and studies; Dale intends to secure his firefighter degree from LIT and possibly minor in theater at Lamar; and Ntsoane wants to go to the University of Texas and become a mechanical engineer.

Proceeds from Friday’s performance will go toward funding a trip to the International Thespian Festival in Lincoln, Neb., for three PNG students who qualified for it.

Resolution? No, just staying fit in the New Year

New Year’s resolutions usually mean a membership to a gym and a promise to oneself to start exercising. But for... read more