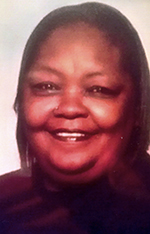 Dorothea Ann LaBarraera 61 of Port Arthur, TX went on to be with her Lord and Savior Saturday, December 24, 2016. She passed away at her home. She was born April 3, 1955 in Lafayette, LA to the union of Leo Barriere, Sr. and Doris Roy Barriere. She accepted Jesus Christ as her Lord and Savior at an early age.

Dorothea attended Thomas Jefferson High School. She worked as a cook until 2006 when her health began declining. She worked at several local nursing homes, with her last job being Golden Triangle Nursing Home (now known as Senior Rehab).

“Mrs. Dot” or “Mama n Dot” as she was so affectionately called by many, loved to cook. She would feed any and everyone that was hungry. She would always say “I can’t do much, but I can feed you.” She was an avid Bingo Player, she and her mother (Granny) would go to American Legion Bingo on Thursday nights and some Saturday, mornings. She enjoyed playing cards, working crossword puzzles, reading romance magazines, reading the newspaper and watching television Golden Girls, Forensic Files, First 48, and Cops. She also loved spending time with her grand babies.

Dorothea was married at a young age to James Banks with this union they had three children. Later she had a set of twins with Willie Kennedy Jr.

Ms. Dot was proceded in death by her parent, a daughter Tawana, one brother Larry, two sisters Sue and Yola, one niece and nephew.

The family of Ms. Dot would like to give special thanks to all Doctors that helped with her care, Dr. S. Sukhavasi, Dr. Gambrah, Dr. Amin, Dr. Malaty, Dr. Hymel, Dr. Lang-Williams, also would like to thank St. Mary’s Hospital Staff, Dubuis Hospital, Cypress Glen Nursing Home, New Jerusalem Church Family, New Hope Missionary Baptist Church, and last but not least Ms. Earline DeJean. We would like to send our sincere gratitude to everyone for your genuine thoughts and prayers. If we missed anyone, please charge it to our minds and not our hearts. God Bless You All.

Viewing will begin at 10:00 A.M. Interment will follow at Live Oak Memorial Park, under the direction of Hannah Funeral Home, Inc.