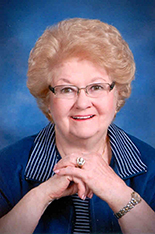 She was born on June 22, 1930 to Faye Skinner Couchman and George Couchman in Boynton, Oklahoma. Melva has been a resident of the area since 1944. She retired from Texaco Research as an administrative assistant. Melva was a member of First United Methodist Church in Port Neches.

She was preceded in death by her parents, her step-daughter, Pamela Buford and her husband, William K. Cozad, Jr.

Visitation for family and friends will be on Thursday, January 5, 2017 from 5:00 PM till 7:00 PM at Clayton Thompson Funeral Home in Groves. Service to honor Melva’s life will be at 1:00 PM Friday, January 6, 2017 in the Thompson Memorial Chapel at Clayton Thompson with Rev. Michael Peschke, officiating. Burial will follow in Oak Bluff Memorial Park in Port Neches.

The family would like to thank everyone at Mid Jeff Extended Care for their kindness and care shown to my mother.