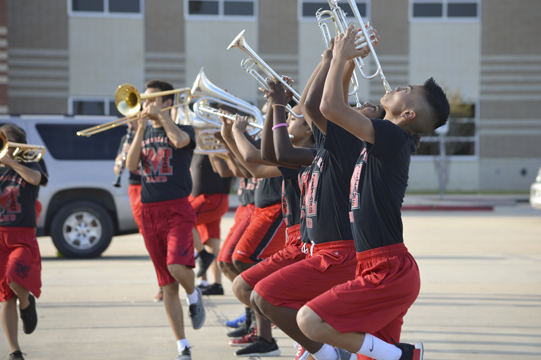 2016 has been a busy year for the Port Arthur Independent School District. Happenings in academics, arts and sports were just some of the events that highlighted a full year for the district.

Mark Porterie, superintendent for PAISD, included in his list of 2016 highlights for the school district the Port Arthur Education Foundation awarding nearly $10,000 in fall 2016 grants to PAISD educators and the overseeing of the creation of the Early College High School program in conjunction with Lamar State College Port Arthur.

The program started in the summer of 2016.

In other academic notables, Memorial math teacher Azineth Buan was named the Region 5 Secondary Teacher of the Year during the Texas Association of School Administrators conference.

“Oh my God, she’s seriously good. I wish I had her before,” Memorial sophomore Tiayana Clayton said. “Ever since I’ve been in her class, I’ve been making A’s and B’s. I think with her help, I’m going to nail it this year.”

Buan’s teaching method seemed to be a plus for her math students.

“She takes her time with us, making sure we understand,” Clayton said. “And when she explains it, it makes sense.” 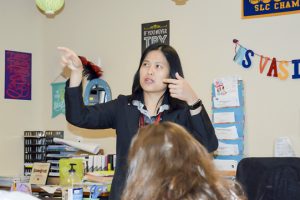 Meanwhile, in musical arts, the Memorial High School Marching Heat band held trophies from competitions across the region this year.

“It’s really a reflection on the kids’ accomplishments,” Assistant Band Director Alex Frazier said. “A lot of them come from blue-collar families and this gives them an opportunity at school pride — to hear the crowd chanting, ‘Memorial!’ in the stands.”

“It’s rare to go to Southern University to perform at halftime and even more rare to be asked to go back a second time,” baritone player and band captain Jeremy Daniels said. “This is a major achievement.”

“I think it helps the (kids) show concern, and it validates that they have something great within them and that they have to share it with the world,” Haynes said. “I think it gives them the opportunity to engage with life.” 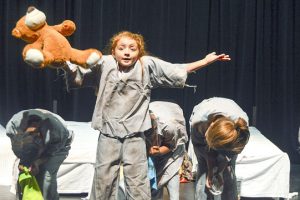 Students from several elementary and middle schools rehearse their song and dance routine as orphans for “Annie: The Musical.” (Lorenzo Salinas/The News)

“This is definitely my favorite realignment day,” Memorial’s head football coach and athletic coordinator, Kenny Harrison, said. “By far the best one Memorial has had in school history.”

Harrison expressed excitement about the opportunity to create local rivalries.

“We have a great group of coaches in this district and we have a great coach in Coach Harrison,” PNG Indians Coach Brandon Faircloth said. “Memorial is going to raise everyone’s level of play.

“They are coming out of a very tough 6A district and will be the big school in our district. Every game in our district is tough, and Memorial coming down just adds to that.”

In school-wide policy, U.S. Representative Randy Weber visited Abraham Lincoln Middle School in October during his Health and Nutrition Tour to hear concerns on child nutrition and health as it relates to PAISD.

“When speaking of education, most people think of books, schools and learning,” Dr. Porterie said. “But nutrition is a huge factor in a child’s education. If they have poor nutrition, they can’t learn properly.”

“It’s important for the kids to see people from the community being successful and coming back to help out,” Erica Seastrunk, principal for Booker T. Washington, said.

“This kind of charity makes the kids feel cared for, loved, and wanting to do their best because they know someone’s looking out for them.”

PAISD is also looking toward its students moving into the Wilson building for the Early College High School program in the fall of 2017.

A 41-year-old man is in custody for last week’s knife attack of an off-duty Port Arthur police officer in his home.... read more