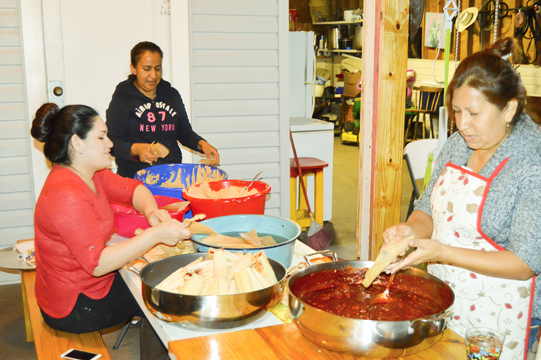 Flor Franco, Vicky Salsa and Inelda Franco work through some of the stages of tamale-making in the Franco garage. (Lorenzo Salinas/The News)

Christmas could mean a great many things to many people; yet, for many families in the Hispanic culture (and Southeast Texas), Christmas could also mean celebrating with the making of tamales during the Mexican holiday of Las Posadas.

Las Posadas is a religious festival celebrated in Mexican culture Dec. 16 to 24. Las Posadas, or “The Inns” in Spanish, is a nine-day observance that commemorates Joseph and Mary’s search for safe haven before Jesus’ birth.

However, the connection between tamales and Las Posadas has been around for many years as the traditional Mexican celebration ties in directly to the Christmas holiday.

Thus, Christmas time has become almost synonymous with tamaleras, or tamale-makers, making and enjoying tamales in many households across the Southeast Texas area.

And in the Groves home of the Franco family, that tasty tradition is no exception. 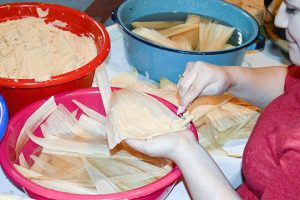 Flor Franco spreads an even layer of masa into the cornhusk. (Lorenzo Salinas/The News)

“We do it for Las Posadas every year,” Flor Franco, a tamalera, said. “Generally in December to January, whenever it gets cold.”

Flor was learning the art from her mother, Inelda Franco, whose house they were at the day before the celebration proper.

When asked how long their family had been making tamales, Inelda estimated that she and her family and friends had been preparing and cooking tamales for 25 years “mas o menos,” or more or less.

Tradition seemed to be important to the Franco lineage, as Flor learned the craft from Inelda, Inelda learned it from her mother and so on through the generations.

“We’ve been doing this since forever,” Flor said with a laugh.

However, just because someone does something for a long time does not mean it is an easy task — making tamales can be a very labor-intensive process.

From cleaning and soaking the cornhusks in warm salty water so they can become soft, to spreading the masa dough evenly, to rolling a secure wrap for the right blend of pork and red peppers, making tamales can be a labor of love.

Inelda said that it usually takes about four to five hours just to prep the tamales for cooking.

For that reason, many families may throw a tamalada, or tamale-making party, where family and friends are invited to help assemble the tamales.

Inelda said that eight to 10 people are usually involved when they make tamales, all of them being family or friends.

“They asked for posada at people’s houses,” Flor said of the Mexican tradition and of people’s celebration of it.

“It’s voluntary, if you want to do it,” Flor said. “It continues the tradition of every year — to have them and to cook for them.”

Las Posadas at the Franco home is celebrated with tamales, punch, fruit and meat — at least with the Francos.

“It’s a tradition for us, but not for everyone,” Flor said. 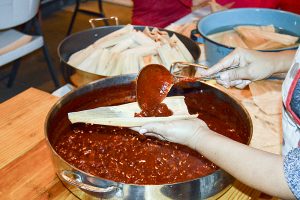 Inelda Franco pours the chili mix into the masa and husk before rolling it up in a secure wrap. (Lorenzo Salinas/The News)

There is also a pinata so the children can have fun, Inelda said.

When speaking of the nine-day observance, Flor noted the importance of it.

“It reminds us of when Jesus was born,” Flor said. “And to share food with other people.”

The Francos share their food and home with friends and family on Las Posadas, as well as with their church community.

“We have bags of candy for the kids,” Inelda said.

“It’s a little party,” Flor said. “Actually, it’s never little; we have a lot of people over.”

Ceremony memorializes no room at the inn

Las Posadas is a popular spiritual exercise at Christmastime in Roman Catholic Latin American culture that many in the United... read more