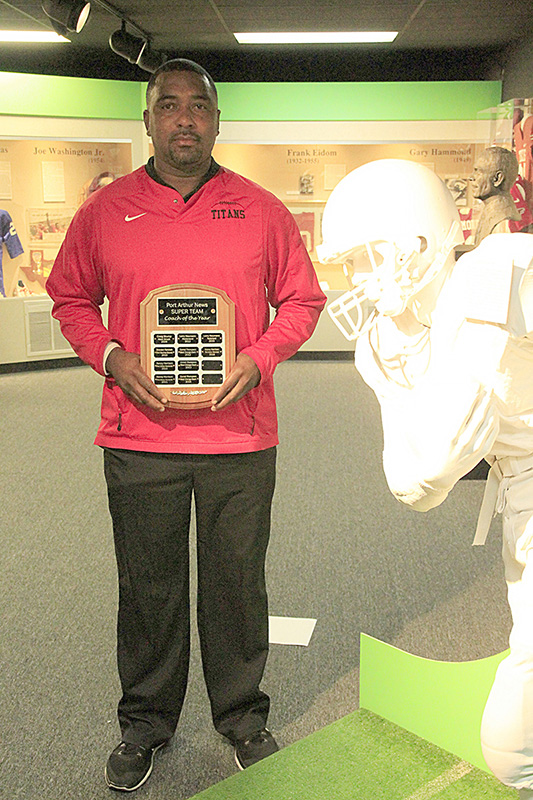 Coach of the Year: Titans take next step with Harrison

Kenny Harrison had a little fun this year.

It was a lot different Harrison than was seen over the last several years. That Harrison coached in Class 6A against teams like North Shore, Jalen Hurts and Channelview and Deer Park.

The 2016 version of coach Harrison coached in Class 5A, and while there are still loads of talented teams in this classification, the Port Arthur Memorial Titans were on a much more even playing field.

Harrison guided the Titans to a share of the District 22-5A title and a trip to the third round of the playoffs. He has been named Coach of the Year on the Port Arthur News Super Team.

“Getting this award means a lot,” he said. “The award represents my staff, [PAISD superintendent] Dr. Mark Porterie, the administration and the team. This really means a lot to me.”

Memorial finished 10-2 and lost to Temple 39-7. Temple would go on to play in the Class 5A Division I state championship and lose to Highland Park, 16-7.

“Temple playing in the final really did us a favor,” Harrison said. “We were on the field with a state finalist, and our kids know now what it takes to get there. I really think our team can build on Temple’s success. It is possible for us to reach that level.”

Harrison now carries a 60-34 record since taking over at Memorial in 2009. He is the school’s all-time wins leader.

This year was one of the most exciting for him considering he knew the group of seniors for many years.

“I watched them grow up since Pop Warner,” Harrison said. “It was really nice to watch those guys go out on a positive note after the last two seasons. Sometimes you don’t know what to expect coming off two losing seasons but they responded from Day 1 and gave it their best.”

Port Arthur Memorial coach Kenny Harrison before the season started said Elijah Hines would be a good running back for... read more