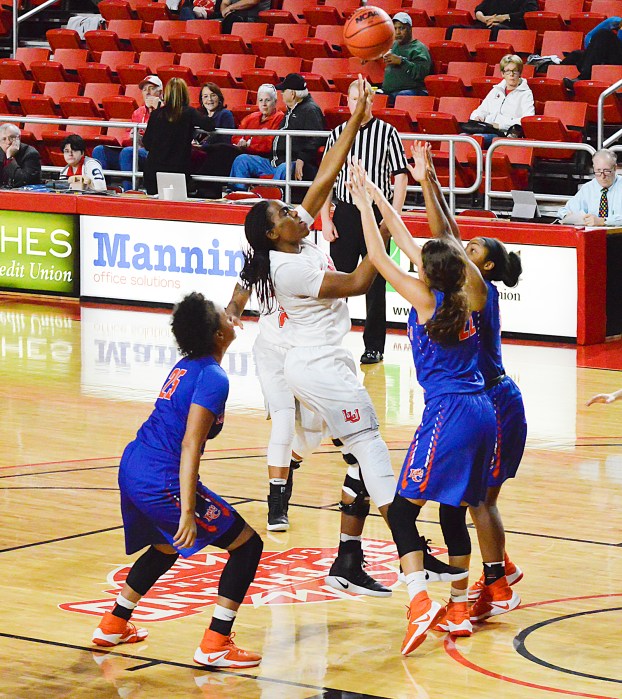 Lamar senior Kiandra Bowers scored 19 points in the first half Thursday against Louisiana College to set a season-high for points. (Gabriel Pruett/The News)

She quickly pointed out it should have been 31 points since she missed four free throws.

“I will be back in the gym soon working on those,” Kinard said. “I have to make my free throws.”

Kinard added 10 rebounds as Lamar improved to 6-3 on the season.

Coach Robin Harmony was pleased with the start her team got against the Wildcats (2-7) and also saw some sluggish play in the third.

Lamar was up 55-19 at the break and started to ease up on its defensive pressure. The Cards began to substitute in different bench players.

It was the reason Louisiana College closed the third on a 21-7 run after the Cardinals built a 51-point lead at 72-21 with 5:35 left in the period.

“Tonight we got a good start,” Harmony said. “We played a good first and second quarter and struggled a little bit in the third quarter. Obviously we were trying to get minutes to players who are not accustomed to it. We are living with their mistakes because if we don’t allow them to make them now and we get to conference, they will do the same thing.

“We took our press off and gave up open shots. It was a learning experience. We have to learn that if we are not pressing we need to fix our quarter-court defense. It is the communication we are lacking. That is frustrating because we love to talk all other times until we get on court.”

Lamar is off until Dec. 29 when the Cardinals host Howard Payne in the team’s final nonconference game.

“They have to make sure they do something on the break,” Harmony said. “They have to at least condition and get some shots if there is a gym available.”

The Cardinals open Southland action at 2 p.m. Dec. 31 on the road against Central Arkansas.

The country now knows about Port Neches-Groves quarterback Roschon Johnson. The sophomore was listed among Sports Illustrated’s “Faces in the... read more