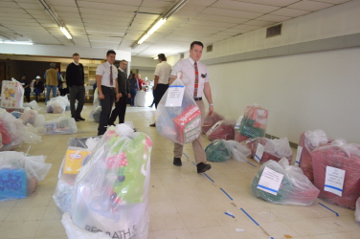 GROVES — More than 400 local families got a little extra help to make Christmas merrier courtesy of the Salvation Army on Tuesday.

Parents checked in with Maj. Nancy Fuller and Glenda Donnell at a desk inside the former site of a law equipment store in Groves then entered a different door where volunteers with sacks of toys met them. 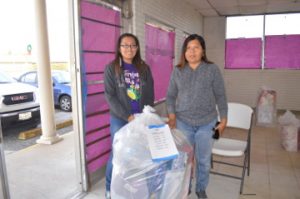 Enith Reyes, left, and her mother Guillermina Enriquez, pick up toys from the Salvation Army on Tuesday.
Mary Meaux/The News

Edith Reyes was there with her mother, Guillermina Enriquez, as they picked up toys for six young children in the family.

“It’s a lot of help,” Reyes said. “With six kids and with bills we’re not able to get all of the Christmas gifts. This really helps.”

Aide Vasquez has been a volunteer during the toy distribution for the past seven years and her family received holiday help.

“My dad doesn’t always get paid much at work and there are bills and not enough for Christmas,” Vasquez, who has five young siblings, said. 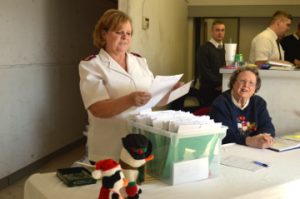 Elder Brandon Roselund of The Church of Jesus Christ of Latter Day Saints was one of a number of other missionaries on tap to help distribute the toys.

“I love it,” Roselund said of helping others at Christmas. “It’s always nice to come out and help those less fortunate.”

Fuller said they have helped 436 families this holiday season, which is a little less than last year because there are so many other agencies offering assistance locally.

Port Arthur’s Red Kettle Campaign and mail appeal are down this year and twice this month there have been break-ins and vandalism to Salvation Army property, she said.

Nationally, the Salvation Army saw an increase in online donations after Dallas Cowboys running back Ezekiel Elliott’s Red Kettle jump during Sunday’s game, according to CNBC.